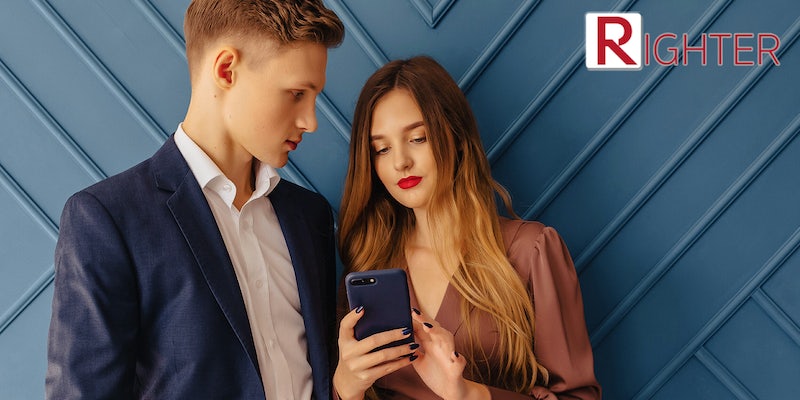 New dating app for #MAGA singles is getting roasted

Righter is advertising with sexist memes—and Twitter is ripping them apart.

Conservatives are having a tough time dating, which, in all fairness, shouldn’t be that surprising given their penchant for putting up walls. Thankfully, a new dating-app called Righter has arrived to keep the far-right from swiping left.

Righter is the dating app for conservatives, certified by its use of hashtags like #MAGA and #borderpatrol. Yesterday it announced in a tweet that it’s about to launch, though no exact date was given.

Righter, the best dating app ever for #MAGA singles, is about to launch. Finally a dating site for us, by us, about us. Why swipe left when you can swipe #Righter!

Righter’s messaging, which dates back to its Instagram posts from October, is what you’d expect from conservative singles looking to reaffirm their sexist and racist views. There are memes about denying access to immigrants. Classism. Snowflake recipes. And how women should be “responsive.” All totally romantic stuff.

Complementarity works because in relationships with men, we can be soft, tender, and the more delicate vessel. We can stand under their protection and follow their leadership. #wearerighter #love #tender #feminine #nuturing #beautiful #loving #strong #soft #deepconnections

Perhaps the boldest attempt at inspiration is the president and Melania Trump’s meet-cute.

In a clip of a CNN interview, President Donald Trump says he met Melania at a fashion week event in New York where he was supposed to be meeting someone else, which is not even the height of the irony here.

“I went crazy,” Trump says in the video. “I was actually supposed to meet somebody else. And it was this great supermodel sitting next to Melania, and I was supposed to meet this supermodel….I said forget about her. Who’s the one on the left?’”

Probably not a great choice of video for an app whose rhetoric is largely based on dismissing the left. Meanwhile, Twitter is not having any of Righter’s nonsense.

A user who goes by @disco_socialist tweeted out repurposed memes of Righter’s memes.

Some tweeted out the irony of Trump supporters, so quick to call out the “snowflakes” who are “triggered,” needing a safe space.

So youre telling me you guys need a safe space?

Sounds like this is a safe space for snowflakes

Others were happy to see the Trump singles segregated from the rest of the dating pool.

What could possibly go wrong with this idea? pic.twitter.com/J2ocJYJMtt

A couple of Twitter users had legitimate queries. But, let’s be honest, those were answered in the racist, sexist Instagram posts.

So no blacks, latinos, or anyone else of color right?

A dating app usually aims to bring people together, not be divisive. Not that turning people off is a surprising M.O. of the far-right—it’s just one that probably needs to be adjusted when it comes to marketing a dating app.