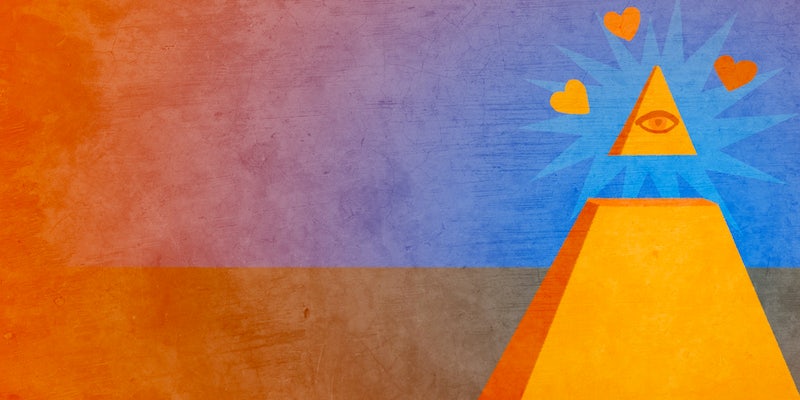 Awake Dating is the hot new website for conspiracy theorists

Perhaps you’ve tried to make a match based on surface connections like eye color, musical taste, or even mullets. But something was missing. Your matches didn’t share your curiosities, your drive for finding truth in the world. Frankly, they didn’t believe in the Illuminati. If this is your problem, maybe Awake Dating is for you.

Awake Dating is a site focused on pairing up people who identify as “awake,” which Jarrod Fidden, the COO of Awake Dating, defines as “one who has investigated and come to his or her own conclusions on a collection of topics and issues. And through this research and critical thinking, [he] has ‘woken’ from the fantastic false dream carefully crafted for the ‘consumer.’”

Fidden knows the world is a hostile place for those who have woken. To outsiders, the awakened are known as conspiracy theorists or truthers, and are often depicted as crackpots living in bunkers wearing tin-foil hats (the image of which Awake Dating subverts in its own YouTube ad).

But the awakened are not so different than those they deem “asleep.” They are simply looking to connect. And on Awake Dating, where truthers and theorists can be their true selves, maybe they have a better shot at finding love than the rest of us.

Just to clarify, being “awake” is related but very different from the other hot identifier of the day, being “woke.” “Staying woke” is most often used in connection to social justice issues, a maintaining of awareness over what’s happening to a disenfranchised community, a refusal to accept mainstream excuses for things like racism and sexism.

In a way, being “awake” takes it one step further. A person who is intelligent but “asleep” may blame the world’s ills on capitalism, while one who is awake knows to blame it on world leaders who worship the Devil or Saturn (because, according to one source, they are the same). Also, those who are awake take these issues to a conclusion, like chemtrails being poisonous, though, to many, that conclusion doesn’t always exactly seem logical.

Or maybe it doesn’t seem logical to the asleep. Whatever the case, the specifics of awakeness are different to every individual, which is why Awake Dating attracts people of so many backgrounds. The options for “interests” are a grab bag of every conspiracy and alternative lifestyle one can think of. There are the passions and ideas on the more conventional side (veganism, holistic health, cannabis) and those on the extreme (9/11 truth, hollow earth, “Jewish mind control”). And every user is a unique combination of one or two or seven truths. Your match may be into “Magick in the Corporate Music Industry,” but he also likes cocktails.

At Awake Dating, you’re free of judgment, says the site’s founder, whereas “your family, former friends, and colleagues will prefer to brand you as ‘cracked’ for speaking what you perceive as truths.”

Fidden says he and his wife started waking up about two years ago, but he’s aware what a lonely experience the process can be. “Knowing and discussing ‘socially inconvenient conclusions’ distances one from most everyone who has yet to engage in their own research,” he says. “Your family, former friends, and colleagues will prefer to brand you as ‘cracked’ for speaking what you perceive as truths.” Therefore, he believes there is a deep need for a service like Awake Dating, which allows users to post their beliefs and interests free of judgment.

Initially, Awake Dating only allowed users to look at profiles that matched their romantic interests, based on how they identified (there were only four categories: straight man, straight woman, lesbian, gay man). However, Fidden quickly realized the value in opening up communication between everyone so users could pursue friendships and other nonromantic connections. He then created features to connect them all, such as an all-member search, also known as the “Awake City,” a virtually rendered 3D environment where members can meet. 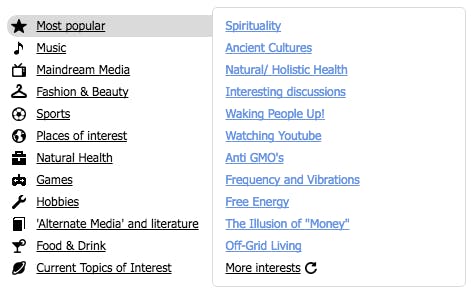 There aren’t a ton of users on Awake Dating yet; the site launched its beta rollout on April 13, and most users still seem to be getting used to the lay of the land. A search says there are 878 users within 1,000 miles of New York City, which whittles down considerably when I try to get more specific (there are just 25 lesbians/gay men in that radius).

A few of the users are friends or acquaintances of Fidden, but others discovered the site while searching for online communities of like-minded individuals. And while there are certainly dating sites that market themselves toward those who believe they’re smarter than the average OkCupid user (one Awake Dating user mentioned Brainiac Dating), it appears that Awake Dating is the only one that combines “awake” interests with the potential for romance.

Many users admit that being “awake” makes it hard to date. Being awake “means being sober-minded, vigilant, alert, hyper-aware of all things that affects our daily lives,” says user Starseed78, a woman who lists “government surveillance” and “CERN” as some of her interests. Awake Dating may be her best chance at finding someone who takes her passions seriously.

“My lifestyle, world views, and spiritual beliefs affect all my choices, from food products to my daily living,” she says, and she believes her interests are “‘out there,’ according to most outsiders looking in, I’m sure.”

Another woman, Spunkypammy, says she “joined due to the lack of people that I connect with on other sites and in life in general. Living in a city as NYC makes it even more challenging to meet people that are ‘awakened.’” Similarly, user Iamkristine, who lists among her interests “channelling” and the mystic Terence McKenna, says she had “an intense spiritual awakening this past year,” and now feels “enlightened. I’m interested in hearing people’s own stories en route to their enlightenment,” she said.

For Code_Monkey_Dan, a user who blogs at iamsully.com, it’s not even about being “awake,” a term he rarely uses. Instead, he believes that practicing “logic, compassion, and an attempt to live a free and dignified life” make him “fringe” in modern America. This mindset is what makes so many users skeptical of other dating sites—the people there just don’t get it.

Starseed78 says Awake Dating is the only social media or dating website she’s on. She wants to keep herself away from the “mass waves of social unrest and social-data beta testing” of other sites. Code_Monkey_Dan optimistically agrees. “I think this site has a lot of upside potential,” he says, “for the simple fact that so many feel underserved by Match or Chemistry or ‘mainstream’ sites like that.”

The awakened come with some preconceived notions about the mainstream, too, however. While reporting on Awake Dating, I was accused of working for a place that has a “culturally Marxist” bias. I was sent flyers and emails attempting to recruit me into fighting the New World Order. I was told that men have it difficult in our feminized society. I was asked to watch the alien-conspiracy flick They Live, because it may be more documentary than fiction.

At much of this, I rolled my eyes, but when immersed in an environment like that, I started to question myself. Were they right? Am I asleep?

I was accused of working for a place that has a “culturally Marxist” bias. I was sent flyers and emails attempting to recruit me into fighting the New World Order. I was told that men have it difficult in our feminized society.

There is a dense air of suspicion and contempt around Awake Dating. The nature of the site almost requires it: At the core of these people’s identity is skepticism, not to mention the belief that the awakened understand things the majority population does not. And those feelings are double-downed the more the general public dismisses what they believe to be “crazy talk.” It’s not hard to see how that can make it difficult not just to date, but to connect to anyone at all.

But what’s amazing about Awake Dating is that it does away with one of the biggest struggles of forming adult relationships. In any new connection, there is the question of how much to reveal about yourself. And when. And how. Of course, everybody should be free and comfortable to be themselves from Day One, but dating doesn’t really work like that. We understand society’s taboos—at what point do you mention you have kids, or that you’re deeply religious, or that you have weird proclivities that your potential partner might have to deal with in the future? When is the right time to divulge you have some baggage? How many dates in until you say you think 9/11 was an inside job?

Awake Dating provides an incredible opportunity to be one’s whole self, right from the beginning. It’s encouraged; it is the entire point. If you’re a Scorpio who smokes and drinks and is stockpiling for the apocalypse, or you live in Seattle and get all your news from Infowars.com—anything that would make you a crackpot in mainstream spaces—it is accepted here.

“Honesty is painful, and shunned these days” says Code_Moneky_Dan. But here, he believes, is a space where people are inspired to be honest. “Awake Dating is something I believe in, support, which is saying a lot for a cynical, skeptical guy like me.”

And really, how enticing is the promise of a space where you are free to be exactly who you are, as weird and nonstandard and “out there” as you may be perceived to be. This safety may be the thing we all want the most, but are convinced that some body, some mysterious “they” is keeping that reality just out of our reach. Which sounds a little ridiculous. But there’s a lot out to worry about out there.