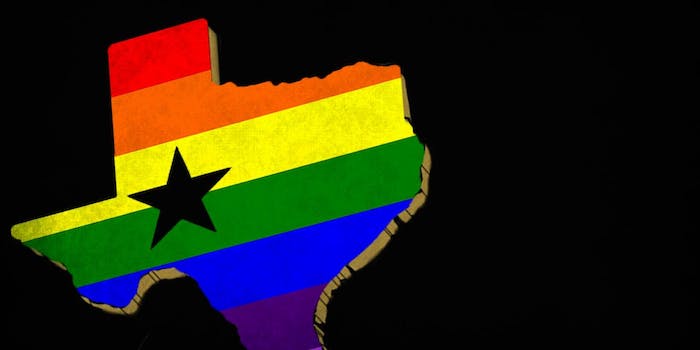 This is more than just awkward; it's sad.

Beau Miller is an openly gay attorney in Houston, Texas, who advocates for LGBT rights in the state. His father, Rick Miller, is a Texas state legislator who is trying to destroy his son’s advocacy work.

Admittedly, state Rep. Rick Miller (R) probably didn’t have his son in mind when he sponsored H.B. 1556, deceptively named the Intrastate Commerce Improvement Act, which contains a provision nullifying city-level LGBT protections in Texas. Nonetheless, the effect of the change would threaten everything Beau Miller stands for and open up the floodgates for discriminatory behavior.

Here is the exact language striking down LGBT protections, which have been adopted in Austin, Dallas, Houston, and other major metropolitan cities:

Rick Miller told the Texas Observer that his bill was simply about states’ rights.

“Competing and inconsistent local ordinances interfere with economic liberty and discourage business expansion,” Rep. Miller said. “nothing in the bill prevents local businesses from voluntarily adopting their own discrimination policy not currently included in state law.”

Beau Miller said that he was “extremely disappointed” with his father.

“If the bill progresses through the Legislature, I’m sure there will be a robust conversation about the impact not only on minority communities, such as the LGBT community, but also on local rule in Texas,” he told the Observer.

If only Rep. Miller, having seen how much pain his anti-gay crusade was causing his son, could learn a lesson from Sen. Rob Portman (R-Ohio). Portman, a lifelong Republican and former opponent of gay marriage, changed his mind after his son Will came out as gay.

“If two people are prepared to make a lifetime commitment to love and care for each other in good times and in bad,” Portman wrote in a Columbus Dispatch op-ed, “the government shouldn’t deny them the opportunity to get married.”

A federal judge struck down Texas’ gay-marriage ban in Feb. 2014, but the case is being appealed to the U.S. Court of Appeals for the Fifth Circuit.