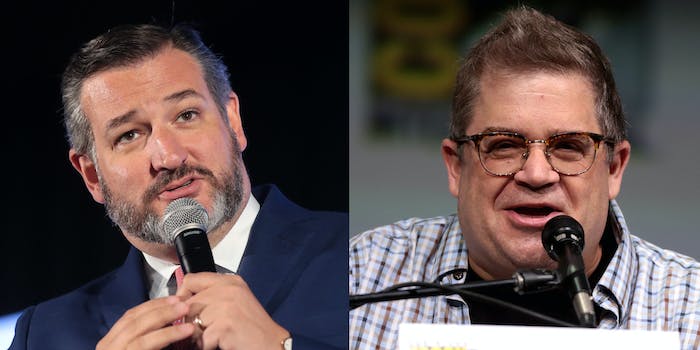 Sen. Ted Cruz (R-Texas) tried to mock comedian Patton Oswalt for deciding to cancel two upcoming shows over a lack of coronavirus precautions. It didn’t work out the way he probably thought it would.

Oswalt canceled upcoming tour dates in Florida and Salt Lake City, Utah after the venues wouldn’t adhere to his requests that those in attendance either be vaccinated against COVID-19 or show proof of a recent negative test.

Apparently, this decision seemed like an opening for a joke to Cruz, who is no stranger to having his tweets backfire on him.

“Both of his fans were disappointed,” Cruz tweeted early Thursday morning, quote-tweeting a story about Oswalt canceling the show dates.

Oswalt shot back at the Texas senator quickly and included something of a “greatest hits” of the things the internet loves to remind Cruz about.

First, the comedian brought up Cruz’s infamous trip to Cancun amid a devastating winter storm in Texas. Then he continued to mock the senator in a string of tweets.

“(sigh) Okay Ted, here we go… Not as disappointed as Texas was when you cut your Cancun vacation short and came home,” Oswalt began in his tweets responding to Cruz. “Ted, you Tweeted this at 1am. Put the phone down and return to liquid form for a few hour. Ted, my fans are all at home, waiting to see you at the January 6th hearings.”

Of course, Oswalt wasn’t the only one who mocked the senator for his tweet. Many other people online also chimed in.

“It is *amazing* how bad you are at this,” one user wrote.

“You should stay away from ‘canceling my travel plans’ jokes, ted,” another user added.

Oswalt bizarrely seems to constantly draw the ire of Texas Republicans. In 2019, Sen. John Cornyn (R-Texas) tried to go after the comedian after he appeared in an ad for his Democratic challenger in an upcoming election.