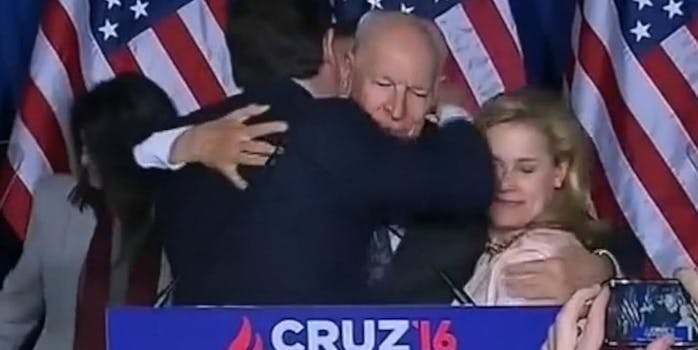 Rough night for the Texas senator.

Now that Ted Cruz has abandoned his campaign to be the Republican presidential nominee, leaving the prize to Donald Trump, the Texas senator can get back to representing his constituency and spending more time with his family.

He probably, though, should be more careful with his arms and elbows and hands and anything else that potentially can hit his wife in the face. That was not a lesson to which he paid attention after getting shellacked in the Indiana primary on Tuesday.

Watch the painful event (for Heidi Cruz, at least) as Ted Cruz finished embracing her and attempted to give a hug to his dad, Rafael Cruz.

And this came after Heidi Cruz defended her husband about how he might be the Zodiac Killer.

“Well, I’ve been married to him for 15 years, and I know pretty well who he is, so it doesn’t bother me at all. There’s a lot of garbage out there,” she said, via Yahoo News.

Not surprisingly, at least one Twitter user took the accidental poking as the perfect symbol of the state of American politics today.