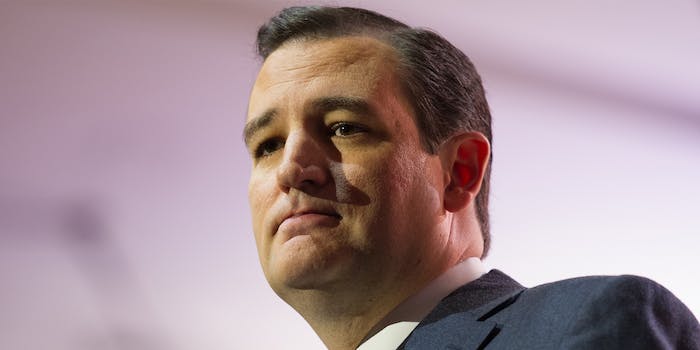 He was spotted trying to upgrade to Business Class today.

Last night, Sen. Ted Cruz (R-Texas) was spotted fleeing his home state of Texas for Cancun, as it grappled with a severe storm, crippling power outages, and a lack of heat and potable water for millions.

The exact kind of crisis a senator might be useful for.

Cruz apparently didn’t care for the cold, and when he was spotted in the airport, the outrage online was swift. It appears he may have seen it because his jaunt is lasting less than a day. Cruz’s name was spotted on the return list for upgrades on Thursday.

He is no longer on the list for the 2:35pm flight frrom Cancun to Houston, meaning he either did not get upgraded, or did not make it on the flight.

Cruz’s office has not issued any statements about the matter since the news first broke.

Update 10:05am CT, Feb. 18: According to the Washington Post, Cruz’s team is prepping a statement saying the plan was always for Cruz to make a short trip in order to safely deliver his family to Cancun.

Update 10:17am CT, Feb. 18: The Washington Post reporter was joking about Cruz’s return. No further update on Cruz’s return date.