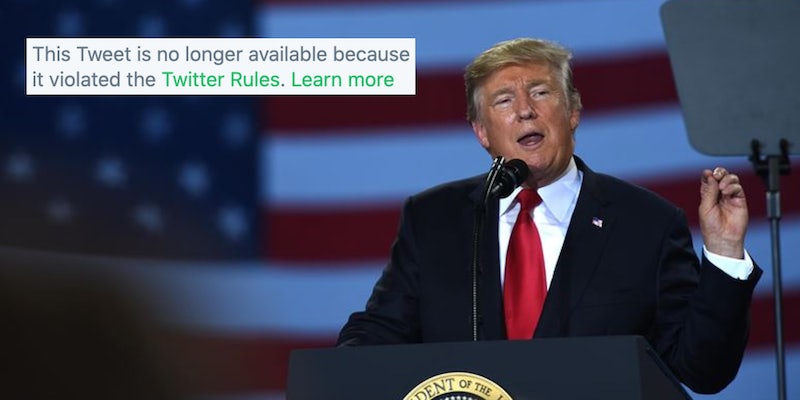 The video was also pulled down from President Trump's official Facebook page.

The account tweeted out a video of an interview President Donald Trump gave with Fox News Wednesday morning in which he alleged that COVID-19 posed little danger to children given that they are “almost immune.”

While the highly-contagious virus appears to hit the elderly the hardest, children are not “almost immune” and have contracted and died from the disease.

The president had also retweeted his campaign’s tweet prior to its removal.

Twitter said in a statement that the Team Trump account would be unable to continue tweeting until the offending tweet is removed, citing the platform’s rules on COVID-19 misinformation.

Neither the Team Trump account nor Trump himself has commented on the incident thus far.

Nick Pacilio, a communications manager at Twitter, told the Daily Dot that it appeared Team Trump had deleted the tweet and regained access to the account as numerous other tweets were sent out Wednesday evening.

The action by Twitter was taken not long after Facebook pulled down the same video from Trump’s official page as well.

In a statement to the Daily Dot, Facebook said that the video shared by the president likewise violated its policies on COVID-19 misinformation.

“This video includes false claims that a group of people is immune from Covid-19 which is a violation of our policies around harmful Covid misinformation,” a Facebook spokesperson said.