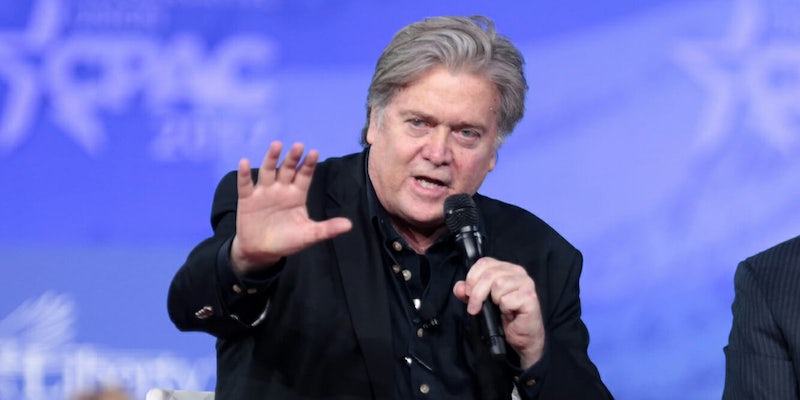 Bannon apparently is interested in the potential of cryptocurrency.

Steve Bannon, the former head of right-wing website Breitbart News and adviser to President Donald Trump, is now high on cryptocurrency—so much so he even floated the idea of creating a “deplorables coin” that apparently would be marketed to supporters of the president.

Bannon has had private meetings with cryptocurrency investors and also has a “good stake” in Bitcoin, the New York Times reports.

But his interest in the new currency could go even further, the newspaper points out. Earlier this year at Harvard University Bannon discussed the creation of a new virtual currency called “deplorables coin,” named after the moniker Hillary Clinton gave to some Trump supporters during the 2016 election that has become a rallying cry of sorts since then.

Much like the former chief strategist saw Trump’s presidency as a disruptive force that shook the status quo, he sees cryptocurrency in the same light, the Times reports.

“It was pretty obvious to me that unless you got somehow control over your currency, all these political movements were going to be beholden to who controlled the currency.”

Cryptocurrency is a decentralized currency that uses digital coins sent over the internet. Bitcoin, and other forms of the currency, have become popular in recent years.

Bannon was ousted from the Trump administration last August. Earlier this year, he declared cryptocurrency one of the three pillars of his new ideology, which became a meme.