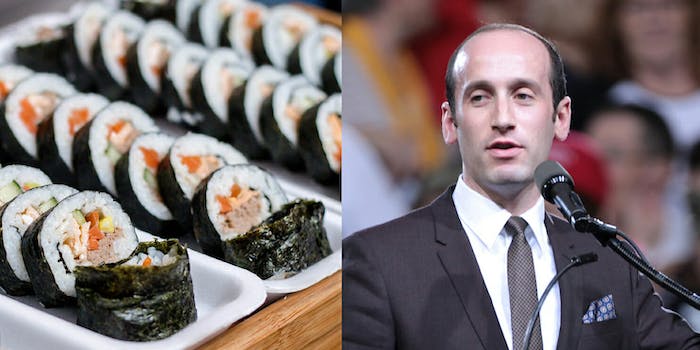 That's a lot of sushi.

Stephen Miller, a policy adviser for President Donald Trump and frequent target of mocking remarks, apparently threw out his sushi after being called out by a bartender in Washington D.C.

Miller, who has been intimately involved in crafting the administration’s roll out of a much-criticized policy of separating undocumented immigrants from their families, was accosted by a bartender recently while grabbing sushi.

The Washington Post reports that the Trump aide ordered $80 worth of takeout sushi from a restaurant near his apartment in Washington D.C.

After getting his sushi, the bartender followed him outside shouted “Stephen!” and flipped off the Trump aide. In response, Miller was “outraged” and threw his takeout sushi in the garbage.

The sushi-shaming isn’t the only outrage that has been directed toward Miller in his Washington D.C. neighborhood. Last month protesters who disagreed with the Trump administration’s immigration policy posted “Wanted” posters of the Trump aide around his apartment building.

However, the waste of $80 worth of sushi was mocked online.

I can't get over that this is the same Stephen Miller who last year insulted a reporter as a "cosmopolitan."

Yup, I'm just a regular salt-of-the-earth populist who eats humble $80 sushi dinners, except when someone makes me mad and I throw it in the garbage. https://t.co/8BZlROyT5E

Until the end of my days I will treasure the mental image of Stephen Miller ugly-crying as he throws $80 worth of sushi into a dumpster.