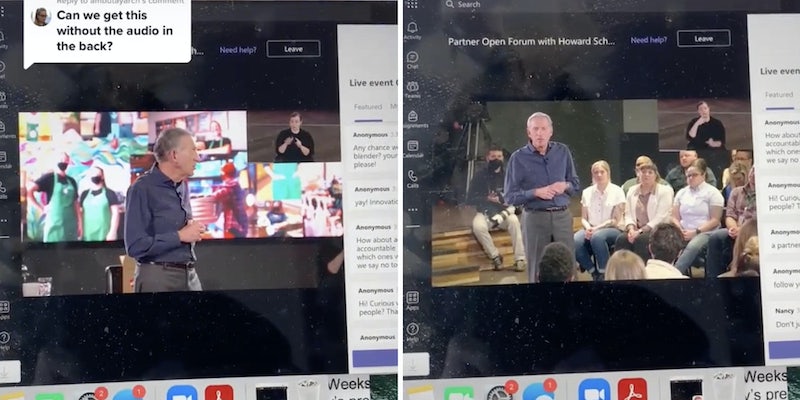 'They say the quiet stuff out loud.'

Starbucks interim CEO Howard Shultz is being criticized on TikTok after a viral video showed him discussing “the threat of unionization.”

“We can’t ignore what is happening in the country as it relates to companies throughout the country being assaulted in many ways, by the threat of unionization,” Schultz says.

Schultz goes on to say he is not anti-union but pro-Starbucks before arguing the company “didn’t get here by having a union.”

“I can say I’m anti-union, and [that] I don’t want to see that at Starbucks. But I’m not an anti-union person,” he says. “I am a pro-Starbucks [person]. Pro-partner, pro-Starbucks culture, pro-heritage, the history of our company.”

Despite his claims of not being anti-union, TikTokers criticized Schultz’s remarks.

“they say the quiet stuff out loud,” one user said.

“If they could outsource those jobs he would do it in a heartbeat. Unionize while u can,” another added.

Others called for an outright boycott on Starbucks, stating the company chose profits over its workers.

“He’s pro keeping his investors pockets full,” one TikToker alleged. “It’s unfortunate he has the be that person. Stay Union Strong.”

“Maybe if they paid better we wouldn’t have to organize,” another user said.

But it wasn’t just TikTok users who had an issue with the CEO’s comments. Starbucks baristas speaking with Yahoo Finance held similar views.

“I think the way that he came across was just very disconnected to the partners,” a barista from Boston said. “It just felt like he still doesn’t understand what this is all about … I felt like he was just trying to frame it as the union is the problem as opposed to our management is the problem.”

Another barista from the Boston area also criticized Schultz’s tone during the town hall meeting.

“I think that the comments and actions Howard made today are excuses and not enough to combat the rising issues that we face,” the barista said. “Instead of talking about the union and the issues that baristas face, Howard made constant attacks on us ‘trying to take Starbucks’ people.”

Since December of 2021, 11 Starbucks stores voted to unionize. Among those stores, nine were successful in their effort. Roughly 180 other stores have filed petitions for unionization.

The drive for unionization is becoming increasingly popular online. Videos from Starbucks on TikTok are regularly bombarded with pro-union comments. Some alleged Starbucks employees on TikTok even claimed the company spied on those discussing unionization.

Even with Schultz’s attempts to portray the company as not explicitly anti-union, workers across the country continue to push for better pay and working conditions.