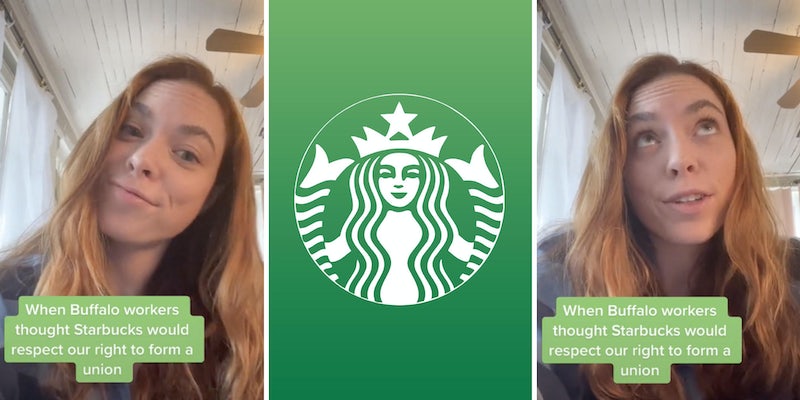 ‘Sent in over 100 out-of-state managers to spy’: Starbucks worker trying to unionize says corporate is cracking down in viral TikTok

'No one forced you to work at Starbucks.'

The battle among Starbucks workers to unionize is heating up, with many online continuing to throw their support behind the effort.

Since December, six Starbucks stores in the U.S. have voted to unionize. An additional 140 locations from 27 states have sought to hold union elections as well.

The unprecedented push for unionization comes amid historic levels of inflation where many with full-time employees feel they are barely getting by.

The movement has become especially big on TikTok, where countless videos on the topic have gone viral. One such video from Starbucks Workers United, a pro-labor collective out of Buffalo, New York, details how the company allegedly responded to their unionization attempts.

The account claims that the company “sent in over 100 out-of-state managers to spy, threaten & intimidate” those seeking to unionize.

The video, which has garnered close to 120,000 views since being uploaded on Sunday, has been inundated with supportive comments.

“Supporting you and your right to unionize, from a former Starbucks employee and union member,” one user wrote.

As is the case with any political subject, others attempted to push back against the effort.

“Try finding a job with a union?” another said. “No one forced you to work at Starbucks.”

Yet the vast majority of comments were supportive. Many other workers also claimed that their stores had been targeted as well for merely mentioning unionization.

“My friend who works at a starbs in Portland said someone just says the word union and they are fired within a week,” one user alleged.

The Daily Dot reached out to Starbucks Workers United for comment but did not receive a reply.

The growing attention on the company comes as Howard Schultz, the former anti-union chairman of Starbucks, takes over as interim chief executive. It remains unclear whether Schultz, who will officially take on the position next month, will deal with the growing unionization movement.