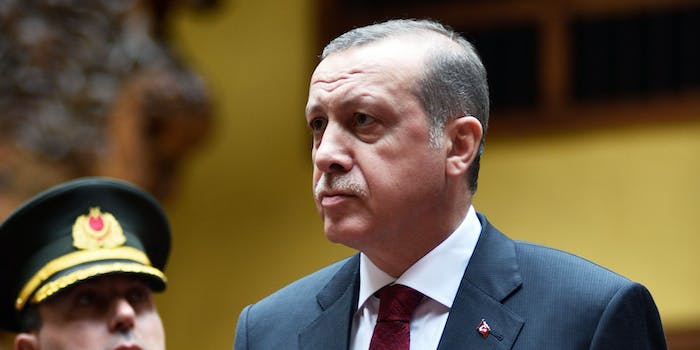 Access to major social media and messaging platforms was suspended in Turkey on Friday morning as the country’s military continues its invasion of northeastern Syria.

Using analysis of network data, NetBlocks internet observatory confirmed that Twitter, Facebook, WhatsApp, and Instagram are all currently being blocked by leading Turkish internet provider TTNet in the southern provinces.

I am in Hatay, and I have to use my mobile data to access social media sites. https://t.co/oj7E2XsrDG

NetBlocks noted that the nature of the block—part of Turkey’s “internet killswitch” now targeting specific cities in the south—demonstrates “an advance in technical capability which facilitates geographically constrained network filtering.”

The block comes just days after Turkey launched its military incursion into Syria dubbed Operation Peace Spring and as bloody footage of those injured or killed by Turkish mortar fire, some of them young children, began to circulate online.

Although the Turkish government has not issued word of a broadcast ban just yet, it is reported that the ban is part of “wartime social media restrictions” aimed at protecting troop and equipment deployment information.

The so-called “internet killswitch” was made law in Turkey in 2016 and permits the government to “partially or entirely” suspend the country’s internet access in the interests of national security. The power does not require ministerial oversight and the Turkish government has used the capability several times in recent years.

The move to prevent internet access for its citizens on this occasion, suppressing what they see of the current ongoing incursion, also comes as Turkey wages a multi-language astroturfing campaign for public opinion on social media platforms using networks of bot accounts to push pro-military propaganda.

Both the international community and a bipartisan slate of U.S. lawmakers have voiced their criticism of the invasion and of President Donald Trump, who paved the way and gave tacit approval for the Turkish operation with his decision to withdraw U.S. troops from the area and abandon Kurdish allies in Syria.

Turkey says its objective is to create a 20-mile deep and 298-mile long “safe zone” along the Syrian side of the border, eradicating “terrorists” and resettling up to two million Syrian refugees currently living in Turkey who fled there during the eight-year-long Syrian Civil War.

The contested border territory is part of the autonomous democracy of Rojava and is currently held by an alliance of Kurdish and Arab militias called the Syrian Democratic Forces (SDF), dominated by the People’s Protection Units (YPG).

Turkey regards the YPG as a terrorist organization with links to a separate Kurdish rebel group. Turkey’s assessment of the relationship is rejected by the U.S., however, who partnered with the SDF in the defeat of ISIS.

Meanwhile, in the face of Turkey’s advance, the SDF has vowed to defend its territory “at all costs.”