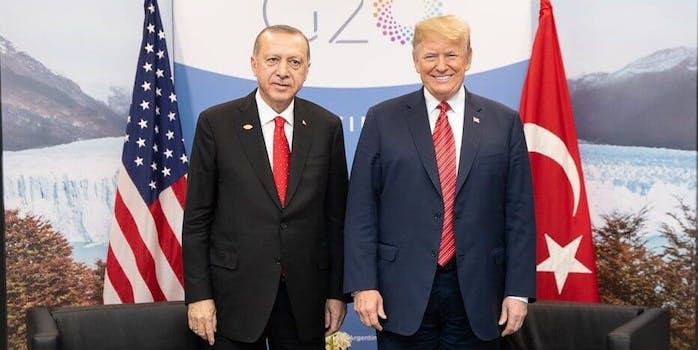 Last night, the White House announced that the U.S. would pull out of northern Syria, allow Turkey to invade, and make Turkey responsible for the nearly 60,000 ISIS imprisoned there.

The move immediately sparked outcry over the U.S. abandoning its Kurdish allies, who have been a key in the fight against ISIS. A Kurdish representative called the decision a “stab in the back” and vowed to fight a Turkish invasion

(Turkey considers the Kurds to be terrorists.)

Turkey cast the move as a means of resettling up to two million refugees who fled there to escape the Syrian civil war. The Kurdish believe that this is a ruse for an invasion.

Thank you Prime Minister Erdogan for joining us yesterday to celebrate the launch of #TrumpTowers Istanbul!

This April 2012 Ivanka tweet may get a lot of new traction in the coming days, as this information becomes newly relevant. https://t.co/5ckJDdzRtQ

THIS… Is why he’s doing it – #Trumptowers of course. pic.twitter.com/pttFpej5KK

But I hear that Trump Tower Istanbul will have a lovely Spa by Ivanka https://t.co/TLuvJ4QBVD

Among those joining the outcry were Nikki Haley, formerly Trump’s ambassador to the United Nations, and Sen. Lindsey Graham (R-S.C.) and Sen Marco Rubio (R-Fla.).

On Twitter, Graham lambasted the withdrawal as outsourcing the fight against ISIS to Russia, Iran, and Turkey, which he believes will lead to the resurgence of ISIS, allow Iran to exercise unfettered control over Syria, and eventually create a “nightmare” for Israel.

He also said that abandoning the Kurds sends “the most dangerous signal possible — America is an unreliable ally and it’s just a matter of time before China, Russia, Iran, and North Korea act out in dangerous ways.”

Finally, this decision makes it difficult for the U.S. to recruit allies against radical Islam.

Graham later announced that he was introducing sanctions against Turkey if it invades Syria and attacks America’s Kurdish allies.

Hope and expect sanctions against Turkey – if necessary – would be veto-proof.

This decision to abandon our Kurdish allies and turn Syria over to Russia, Iran, & Turkey will put every radical Islamist on steroids. Shot in the arm to the bad guys. Devastating for the good guys.

Trump, for his part, took the uproar with his usual aplomb.

“As I have stated strongly before, and just to reiterate, if Turkey does anything that I, in my great and unmatched wisdom, consider to be off limits, I will totally destroy and obliterate the Economy of Turkey (I’ve done before!). They must, with Europe and others, watch over the captured ISIS fighters and families. The U.S. has done far more than anyone could have ever expected, including the capture of 100% of the ISIS Caliphate. It is time now for others in the region, some of great wealth, to protect their own territory. THE USA IS GREAT!” he said in a pair of tweets.

This morning, the Syrian Observatory of Human Rights warned that a Turkish invasion could create “millions” more refugees.