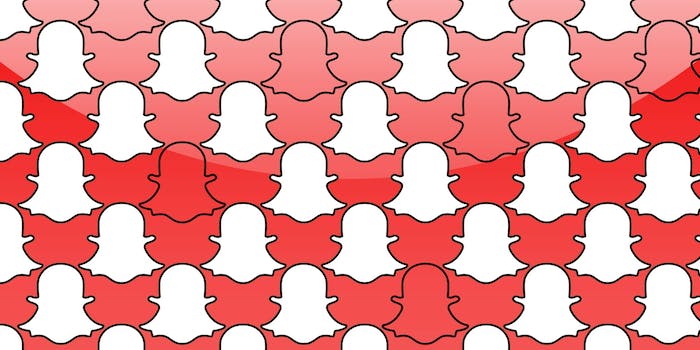 You think it's a 'sexting app.' Snapchat doesn't like that.

For such a sext-friendly app, Snapchat sure hates sex.

In November 2014, Snapchat shut down the accounts of adult performer Domino Damoiselle and five other women notorious for posting risqué photos to the platform.

The company sent them an email that said pornographic content wasn’t allowed on the platform, thus their accounts would be deleted.

Damoiselle and the other women had amassed hundreds of thousands of followers. For U.K. performer Chelsea Ferguson, that number was in the millions.

“We were essentially the Lady Gaga, Katy Perry, and Rihanna of Snapchat,” she said.

In one afternoon, the accounts—and their followings—disappeared. The women received no notice from Snapchat until after the company deleted their accounts. Snapchat sent them a message on Nov. 22, complete with a condescending smiley face emoticon. Damoiselle shared the message with me:

We apologize for any inconvenience and we’re certain you’ll be able to find an audience elsewhere on the Internet :)

Damoiselle and the other performers were early Snapchat users, which in part helped build their massive followings. But it wasn’t until November 2014 that Snapchat began the purge.

Snapchat’s initial crackdown of pornographic content came shortly after news broke that the ephemeral messaging app was in talks with a number of publishers for the launch of the Discover tab. In Snapchat, the relatively unloved tab features snaps from brands and news organizations. Just five days before Snapchat shut down Damoiselle and her compatriots, the app launched Snapcash, a money-sending service powered by Square.

When Snapcash launched, some people speculated that it would benefit sex workers because of Snapchat’s popularity among performers including cam artists and strippers. But according to Damoiselle, because Square facilitates the transactions and bans the selling of pornographic content, using Snapcash for sex work could get your account shut down just the same.

Snapchat’s terms of use haven’t been updated since November 2014, and they make no mention of pornography or adult content. Snapchat’s community guidelines—a set of rules looser than a formal terms of service—suggest that you shouldn’t snap pornographic content as it may result in your account getting banned or your content removed. The guidelines discourage sexting only if a user is potentially under 18 but neglect to define what counts as “pornography.” 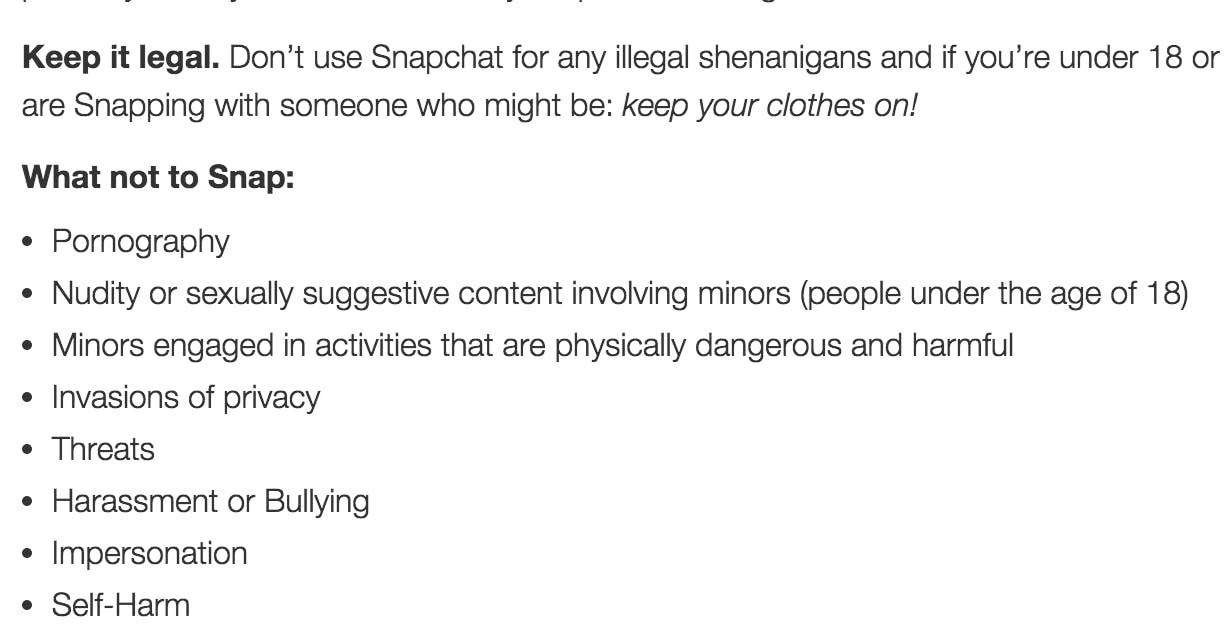 “There really is no such thing as public sexting or sharing to stories, because they’re shutting all those accounts down.”

The company declined to comment on the record about how Snapchat figures out which accounts distribute pornographic content in order to delete them. Snapchat pointed me to its safety page that touches on different partnerships with nonprofits that work to keep kids snapping safely.

When asked if Snapchat views people’s snaps to determine whether or not they’re pornographic, the company declined to comment.

“What irritates me is how they went about it—they essentially had these people build a following for them and just said, ‘Hey, fuck you,'” Damoiselle said. “They’re cracking down on it so much now, that there really is no such thing as public sexting or sharing to stories, because they’re shutting all those accounts down.”

Dave Feuling’s Snapchat accounts are other casualties of Snapchat’s crackdown on adult content. He estimates the company deleted around 20 of his accounts, one of which had 35,000 daily views at its peak.

Feuling runs “College Peep Show,” or TeamCPS, across various social media platforms, a hobby that turned into an LLC with a growing following across the Internet, including Instagram and Facebook.

“It was meant to be a peek into college life but has evolved into complete randomness,” he said in an email. “It is 99% user submitted photos. People snap them to me and I pick my favorites and upload them again.”

His accounts started getting shut down in mid-November, around the same time Damoiselle and other performers received notices that Snapchat was banning them from the service. Unlike other accounts, however, Snapchat never contacted Feuling—his accounts just disappeared. Last month, he had four accounts shut down within a week, but sometimes, he said, they will stay up for months at a time.

“I’ve never received an email about a disconnection or my concerns,” he said. “I’ve contacted them maybe a dozen times via email and Twitter. The only response I’ve gotten is a robot reply thanking me for contacting them.”

Snapchat’s terms do say that once a user is suspended, he or she can’t create another account, but Feuling was never told why or when his accounts were deleted. Snapchat logs Feuling out of the app and his username disappears. When he tries to login, the app says the username does not exist.

Even Feuling’s private Snapchat—one he opened long before he started TeamCPS—was banned. Feuling’s snaps aren’t exclusively pornographic, either. Most of the photos people send him are your stereotypical college co-eds, and feature drinking, cars, swimsuits, and music festivals, and very little, if any, explicit nudity.

Where Snapchat fails, others flourish

When accounts that snapped adult content began getting booted from Snapchat, they turned to other services. Both Feuling and Damoiselle are most active on Cyber Dust, a Snapchat competitor backed by Mark Cuban. Snapgirlz, a service for adult performers, turned to MeWe to enable cam girls and their fans to chat after the Snapchat purge. And Snapchat clone Yeti is finding some mild success on college campuses, where students are sharing their drugged out, sex-filled experiences.

Damoiselle told me that she and three of the original five or six accounts kicked off in November joined Cyber Dust, and it was that messaging app on which I connected with Feuling initially. He said the app is much more responsive than Snapchat, and the company seems to appreciate how active he is.

“That’s one of the incredible things about Cyber Dust. I’ve never had a question or comment go unanswered and I’ve even had a few brief conversations with Mark Cuban,” Feuling said. “Cyber Dust welcomes all content, I have even been thanked for being an active account. I typically post daily.”

It’s fairly easy for someone to build a decent following on Cyber Dust, especially if you have the support of other users. After Damoiselle befriended me on the service, I was bombarded with over 1,100 followers wanting to see my content. It’s clear Cyber Dust is being used for sexting—a number of my new followers had naked photos of both men and women as their avatars, and I received a number of “dusts” from people wondering if I was open to sexting.

Cyber Dust is similar to Snapchat in that your messages self-destruct. You can befriend and follow different accounts, and can group message with other Cyber Dust users. It also sends you popular “blasts,” similar to tweets, and lets you share text posts, links, and photos with your followers.

Cyber Dust hasn’t grown dramatically with departures from Snapchat. It’s still yet to crack the top 100 social apps in the U.S., according to analytics firm App Annie. But it does provide a refuge for people wanting a place to share pornographic content without the threat of losing potentially millions of followers.

All this is not to say Snapchat remains sext-free. It’s still one of the most popular platforms for finding and sharing adult content. There are entire forums dedicated to meeting people anonymously through the app to begin sexting relationships in a safe, age-appropriate way. But with the purge of adult entertainment, Snapchat is shrugging off its entire identity as a sexting app, and spurning users much the same way as social networks like Facebook and Instagram do.

Once Snapchat had firmly established itself as a monetizable, mainstream social app, it started cleaning house. Unfortunately, that process involved kicking out its very first tenants.