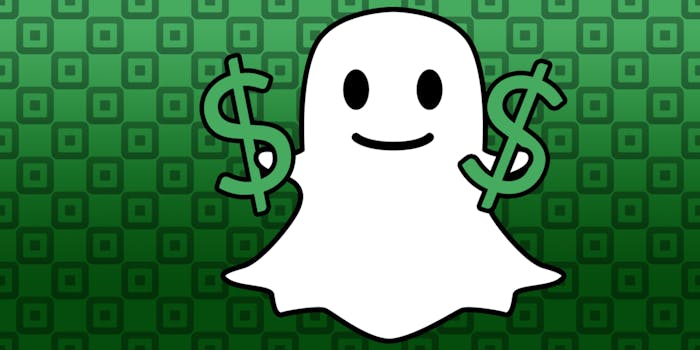 Send money via Snapchat, if you dare.

Snapchat, the disappearing messaging application with a history of false, ephemeral promises now wants to control your money, too. On Monday, the company announced a partnership with e-commerce startup Square to allow people to send and receive money through Snapchat.

Snapcash is lauded as a simple way to send money to friends—people just have to connect their debit card to Snapchat, and can send money the same way they send text messages in the app. Once a user has connected their payment option, they can submit a transaction by typing “$” followed by the amount. Snapcash is based on Square Cash, the payment company’s own product that allows cash to be sent via email.

Snapchat’s announcement doesn’t mention money disappearing like photo and video messages, though it might be wise for people to use caution when sending money to friends on the service. According to the Electronic Frontier Foundation’s “Secure Messaging Scorecard,” Snapchat only fulfills two out of seven privacy and security measures. It’s seriously lacking major security features, including the ability to verify contacts’ identities and code that is unavailable for independent review. So it’s not actually a secure messaging app at all.

Though Snapchat says Square is playing a large part in securing the transactions, Snapchat’s own history with data leaks raises concerns. In January, hackers leaked username and phone number data on 4.6 million Snapchat users thanks to an exploit in the Find Friends feature, and in May, the company settled with the Federal Trade Commission over accusations that the messages sent and received on the application don’t actually disappear.

Snapchat’s own privacy policies appear to contradict its claims of ephemerality:

We can’t guarantee that messages will be deleted within a specific timeframe. And even after we’ve deleted message data from our servers, that same data may remain in backup for a limited period of time.

The new privacy policies are getting some extra attention today, thanks to Snapcash—some people finally noticed that clause that says snaps might not actually disappear. But the wording in this policy is not new. Snapchat’s privacy policies have stated that the company can’t guarantee deletion of messages since May 2012. The onus to protect data and messages has always been on the user, and users are apparently much too trusting.

If you trust Snapchat to handle your money, Snapcash is available now to U.S. users who are at least 18 years old and have a debit card. For basically zero explanation of what Snapcash is, you can watch this marketing video to decide whether or not to give the messaging app access to your money.