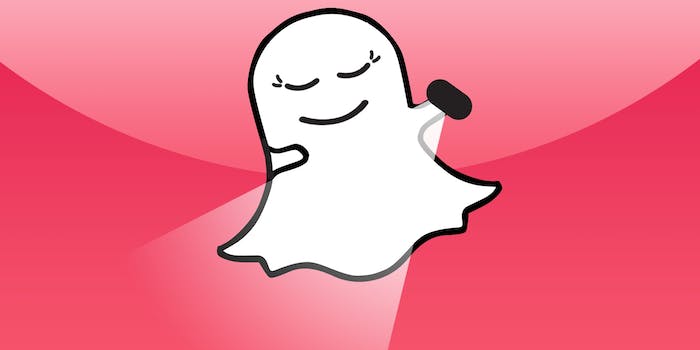 What it’s like to run an anonymous Snapchat sexting ring

A 22-year-old woman tells all.

When WhoPutThatThere decided to become a moderator of r/DirtySnapchat, the 22-year-old didn’t use the subreddit herself. Already a mod on r/Snapchat, she was just looking to make friends.

Now she, along with nine other male moderators, are in charge of running and managing the two-year-old forum that’s grown to over 25,000 subscribers, all redditors who want to find age-appropriate partners to sext with on Snapchat.

“I find it enjoyable to manage the subreddit,” WhoPutThatThere, who requested to be quoted only by her Snapchat username and Reddit handle, told the Daily Dot in an email. “Just like with any ‘job’ there are highs and lows, there are frustrating moments and there are moments where things could not have worked out better.”

Snapchat was built on sexting, despite numerous revelations that the photos shared to the “ephemeral” service might not actually disappear. While the company has tried to crack down on adult content on the app—including banning several high-profile Snapchatters last fall—sexting still runs rampant. And for many people, snapping with strangers is an outlet, and a way to express themselves without any strings attached.

Of all the forums that exist to facilitate sharing sexy content on Snapchat, r/DirtySnapchat is probably the most legitimate and least graphic. Others, like snapchatsexters.com, kiksexting.com, and sextingforum.net (all NSFW) boast tens of thousands of responses in threads bursting with graphic photos and promises of lascivious content associated with a Snapchat handle. Often these threads contain demographic information, and, somewhat troubling, descriptions of snapchatters who are in their teens.

It’s impossible to tell whether or not these users are real, though many forum users seem to want to believe the original posters are who they claim to be. Throughout the forums there are, unsurprisingly, a huge number of spambots as well.

WhoPutThatThere and her fellow moderators deal with none of that on Reddit. The rules are clear—you must be 18-years-old or older and a real human person in order to participate in the forum. Any posts claiming to be underage will be removed immediately.

Each day, moderators crawl through the posts, deleting spam and banning anyone who isn’t adhering to the rules. They also created an AutoModerator to delete posts that aren’t formatted correctly. Like other subreddits, redditors are encouraged to report anyone who is misbehaving, and so far, this community-reporting system has worked. But unlike other sexting forums, the obvious spammers aren’t hawking erectile dysfunction pills—they’re stealing people’s photos and sharing them as if they were their own.

“I’d say the most common posts that get reported are those of spammers,” WhoPutThatThere said. “It’s pretty easy to tell, once you add someone and you notice the images on their story are not the correct size, there’s extra space, there’s slightly different people, they’re advertising things, etc.”

To prevent catfishing, the subreddit provides a “Fake User PSA” at the top of the forum—anyone that has a fake account will be added to the list.

“I have gone as far as screenshotting a user’s story snap and doing a reverse Google image search to see what might show up,” /u/throwawayrichard, moderator of both r/DirtySnapchat and r/Snapchat said in an email. “Turns out he/she was taking them from someone’s Instagram.”

It’s a helpful policy, considering the potential for people to rip photos off the Internet in an attempt to get real photos in return.

Catfishing 101 (extremely NSFW) is a Tumblr dedicated entirely to posting catfished photos of straight men. The anonymous person running the site receives images submitted by followers and posts them to the blog with a comment on the appearance of the man. As the site’s tagline explains, “Straight boys are always willing to show off.”

Providing insults or commentary isn’t the only thing the admin prides themselves on: Catfishing 101 is also a how-to guide for anyone wanting to take advantage of their own target. Tips include the suggestion that Instagram Direct is “the easiest way to do it,” and “I’ll start off with a pic showing a little skin and acting like you got the wrong kikname or you put it in incorrectly.” The blog’s admin even takes requests to manipulate people into sending them photos of their penises. 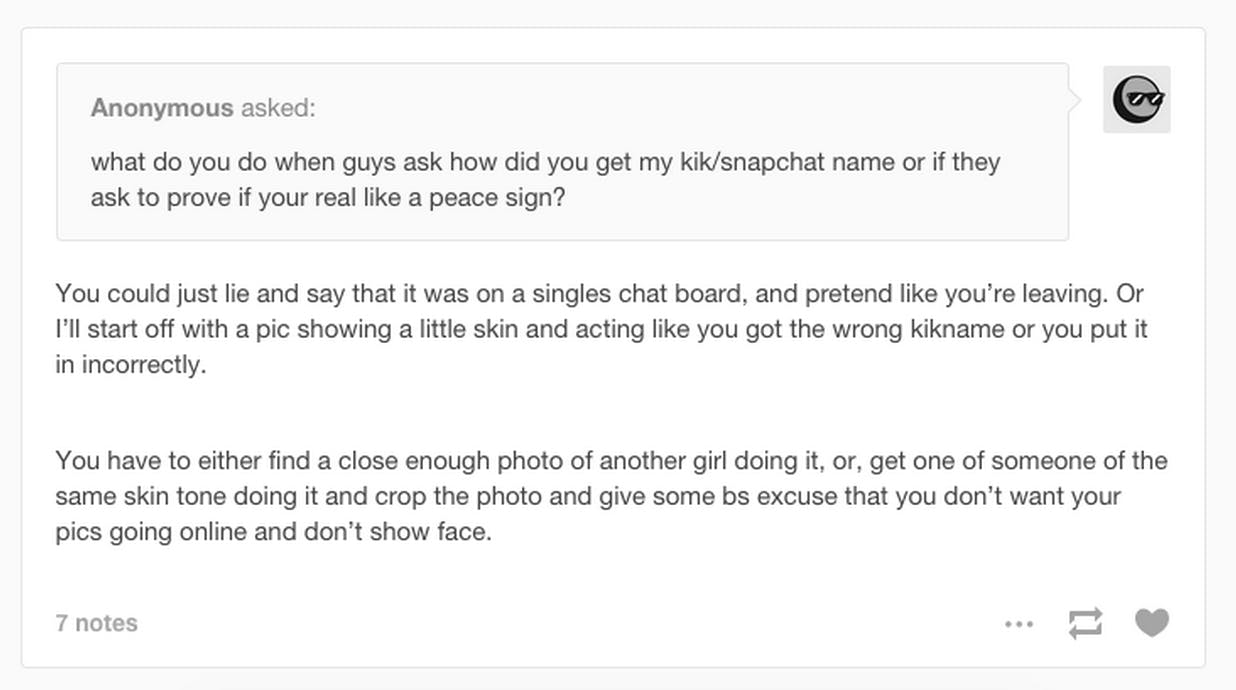 With the addition of Snapcash last fall, catfishing posed an even greater problem. On Snapchat, suddenly users could send lewd photos and money to anonymous strangers.

“Sometimes there are catfish that try to scam money from other users. Men also like to post as women from time to time, perhaps out of curiosity or because they prefer the same-sex and want to receive a plethora of nude pictures,” throwawayrichard said. “Users should be careful who they are snapping, especially after the creation of Snapcash and the ease of transferring money to another snapchatter.”

On r/DirtySnapchat, users have their own version of verification to prevent anyone landing on a blog like Catfishing 101. Decorated with subreddit-specific flair, these verified accounts are required to send in two photos with a handwritten note confirming their identity and Snapchat handles. Moderators review each submission and assign the flair—”male,” “female,” “couple,”  “trans”—accordingly.

If snapchatters (on r/Snapchat or r/DirySnapchat) are verified to be female, they’re also put into a separate, private subreddit for women only.

WhoPutThatThere notes that distributing flair can be stressful. In an effort to affirm the gender of the subreddit’s users, she believes that it is important to approach flair very sensitively. DirtySnapchat takes its verification process very seriously.

“One of my favorite flairs I have ever handed out was to someone who identified as transgender and AFAB (assigned female at birth) who told me: ‘Most trans people don’t just identify as just ‘trans,’ they’re usually men, women, or some flavor of non-binary like myself,'” she explained. “So I found it difficult to give them the orange ‘trans’ flair because I felt like they were more than that. I didn’t have any way of indicating what they had wished without the text covering their flair and looking sloppy, so we came to the conclusion that they would [self identify] when posting, and they said they could always ignore people who get inappropriate from the beginning.”

She says while most of the content is consensual and sex-positive—including the Naked Bakers “who love to show off their bodies and their baking skills, which anyone willing can appreciate a nice bonbon and some boobies!”—spam still happens. Like elsewhere on uglier corners of sext-friendly networks, unsolicited dick pics still happen.

Being on the receiving end of endless sexts can overrun a person’s senses, and moderating has the potential to become more of a chore than an enjoyable side-project. At least one mod, throwawayrichard, no longer verifies dirty accounts. “I am not as active as I used to be,” he said. “Dirty snapping also tends to get very exhausting so I stick to ‘clean’ folk nowadays.

“For me personally, things got to be exhausting because it takes a lot of effort to keep the girls interested and excited considering there are a ton of other guys also snapping them. I have had much success, due to a variety of reasons, but after a while, the process becomes repetitive and not as fun.

“Plus, given the nature of the subreddit, there is some pressure to ‘perform’ which can get physically exhausting as well. I would much rather focus my efforts in the real world now instead. I’ve found more long-lasting connections from “clean” Snapchatters, whose friendship is based more on personality, and still talk to a few people that I came across a long time ago.”

According to WhoPutThatThere, the subreddit hasn’t experienced many instances of Snapchat accounts getting shut down, despite the relatively public nature of the forum.

Still, in the subreddit’s earlier days, Snapchat did delete an account distributing login information to a single Snapchat account (the idea was that anyone could sign in and snap directly on one account). It’s unclear whether it was the adult content or massive number of logins that ultimately led to the account’s removal.

For the hoards of people wanting to get salacious on Snapchat, r/DirtySnapchat is about as above-board in terms of forums as you’ll find. It’s impossible to make it entirely safe, but the 10 moderators spend their days curating a space where people can open themselves up, sometimes literally, to like-minded snapchatters who enjoy the human form.

“Relationships come in all sorts of varieties, including true friendships, friends with benefits and even genuine exclusive dating, I’ve seen all of these come out of snap relationships of other people,” WhoPutThatThere said. “You give a group of people a platform to communicate with, and you’ll find those types of relationships nearly anywhere.”

User throwawayrichard said he knows one woman who is flying to meet a man who she initially connected with through dirty snapchatting, but is not sure whether or not they met through the subreddit. DirtySnapchat is all about sexting, but it serves as a special outlet for it members and the mods who strive to keep it safe.

“I think consent is awesome and necessary, and I believe that if the exchange of sexually suggestive pictures are between two consenting parties, there is no problem,” WhoPutThatThere said. “But, again, if you choose to advertise yourself to thousands of strangers, there’s no knowing what might happen when you open yourself up to it.”