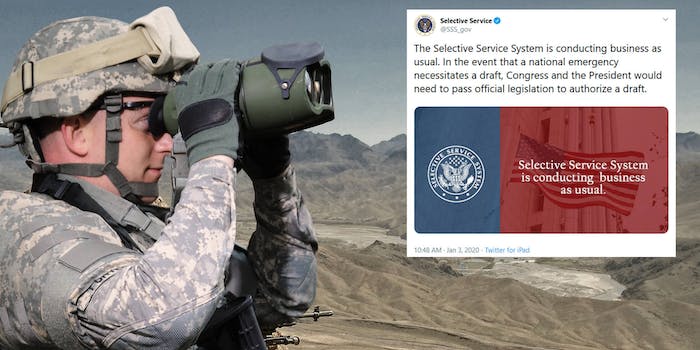 The timing of the tweet caught some people's attention.

The Selective Service System, the government agency that oversees registrations for the military draft, said on Friday that it was “conducting business as usual” early Friday amid the news that the United States had killed Iran military leader Qassem Soleimani.

President Donald Trump’s order to kill Soleimani has furthered tensions between the United States and Iran, with the Middle Eastern country vowing “harsh revenge” in response to the airstrike.

As people woke up Friday to the news, the Selective Service System decided to tell everyone that it was “conducting business as usual” and reminded people that a military draft would need authorization from the president and Congress.

“The Selective Service System is conducting business as usual. In the event that a national emergency necessitates a draft, Congress and the President would need to pass official legislation to authorize a draft,” the agency tweeted on Friday morning.

The Selective Service System is conducting business as usual. In the event that a national emergency necessitates a draft, Congress and the President would need to pass official legislation to authorize a draft. pic.twitter.com/M4tY2dLoX1

Naturally, the tweet drew some attention given its timing.

Nothing to see here. Everything's normal. Move on! https://t.co/7Z3POWffQe

The fact they even needed to say this… https://t.co/qc9YP60vDu

The agency appears to have had a busy day. It’s website went down in the afternoon, with it slowly coming back online Friday evening.

Due to the spread of misinformation, our website is experiencing high traffic volumes at this time. If you are attempting to register or verify registration, please check back later today as we are working to resolve this issue. We appreciate your patience.