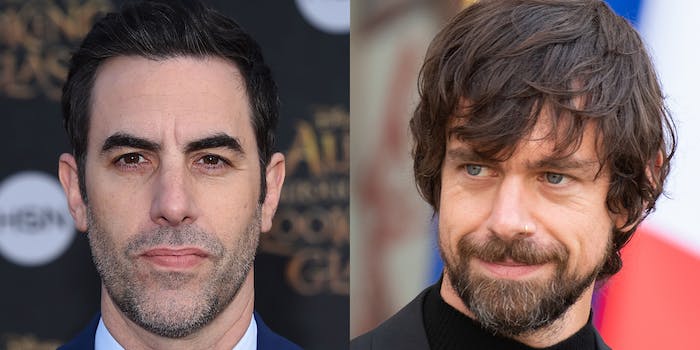 Reports of antisemitic attacks in the United States have risen sharply in recent weeks. Many believe the increase is at least partially inspired by this month’s wave of violence between Israel and Hamas.

Actor and comedian Sacha Baron Cohen believes that Twitter and its CEO Jack Dorsey are also to blame. The Borat star tweeted Saturday that allowing antisemitic hashtags and content to proliferate on the site directly contributes to real-world violence and discrimination against Jews.

“…Why do you allow #HitlerWasRight ?! Those who celebrate the Holocaust aim to perpetuate another. #StopHateForProfit.”

Others, including actor Mark Ruffalo, have made similar pleas of Twitter and Dorsey in recent days. The site does prohibit hate speech, but it has been repeatedly criticized for failing to effectively enforce the policy.

While some praised Cohen and echoed his sentiments, the debate about which side is more to blame—the Israelis or the Palestinians—played out in the comments.

Cohen’s tweet linked to a preliminary report from the Anti-Defamation League that found more than 17,000 tweets with some version of “Hitler was right” from May 7-14. The ADL has also reported that in the week prior to the outbreak of violence in Israel, there were 131 possible antisemitic incidents reported in the U.S.; the week after, it increased more than 50%, to nearly 200.

On Friday, five Jewish groups, including the ADL, wrote President Joe Biden a letter imploring him to address the increase in antisemitism. On Monday, Biden spoke out.

“The recent attacks on the Jewish community are despicable, and they must stop. I condemn this hateful behavior at home and abroad—it’s up to all of us to give hate no safe harbor,” the president tweeted from his official account.

The White House has also been working behind the scenes to broker a ceasefire between Israel and Hamas, which went into effect late last week. On Monday, Biden announced that Secretary of State Antony Blinken is headed to the Middle East to meet with Israeli and Palestinian leadership.