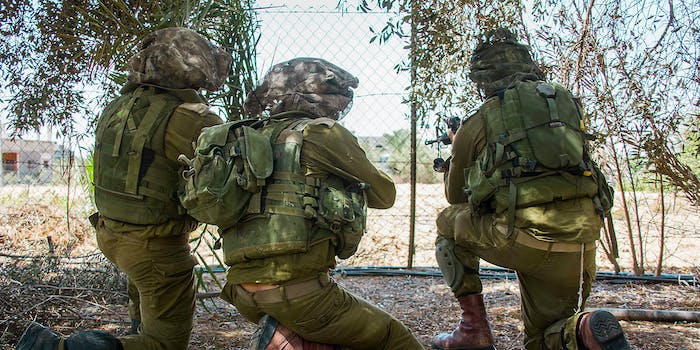 The group didn't handle the joke with good humor.

Stop Antisemitism, a reactionary online activist group, is demanding to know who at the Onion cracked a satirical joke about an Israeli Defense Forces soldier that upset them.

Stop Antisemitism says its a nonprofit committed to exposing antisemites, but just as often picks fights with progressive Jewish activists.

This week, many decried the actions taken by the Israeli government against Palestinian refugees and protesters as fighting broke out in the region. Israel this week was accused of killing Palestinian children in air strikes.

Longstanding tension between the regions peaked on Monday as militant group Hamas announced that if the Jewish settlers did not leave East Jerusalem it would fire rockets into Israel.

That came after Israeli forces blocked Palestinians from the Damascus Gate and al-Aqsa Mosque, the third-holiest site in Islam, during Ramadan.

As a result, Hamas fired rockets into Jerusalem and southern Israel on Monday. Israel responded with airstrikes into the Gaza Strip that killed at least 26 people, including nine children, according to Palestinian officials.

But Stop Antisemitism did not appreciate the Onion’s wry commentary and demanded to find out who was behind it.

“Work at the Onion and know who tweeted this? DM us for a prize, you can stay anonymous,” the account replied to the Onion’s post.

Onion contributor Mara Quint joked back that it was a part of the Onion’s “BOFA” policy. “BOFA” is a long-standing internet prank.

“I’m Jewish and a contributor to the Onion, I’d be happy to talk to you about this. Frankly it’s been part of their ongoing policy of BOFA and I’m glad someone’s paying attention,” Quint tweeted.

Quint wasn’t the only one to chastise and mock the group for losing it over a joke.

Stop Antisemitism wants you to know they’re extremely not mad though, claiming it was a joke after the post blew up, even though they closed their DMs after getting flooded with gross suggestions.

“We’re not sure what’s more pathetic – the trolls that actually thought we were serious or the RT reporter that took time out of his actual day to WRITE a story on it,” they wrote.