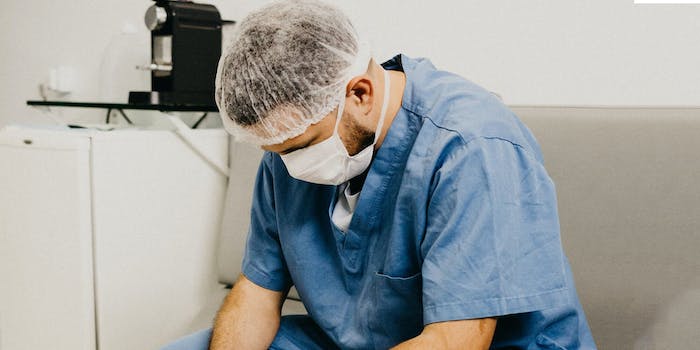 Two doctors have died while another remains in critical condition.

Three doctors in Russia have fallen out of windows in recent days not long after they reportedly complained about issues linked to the coronavirus.

The latest incident, which took place over the weekend in Russia’s western Voronezh region, saw 37-year-old Alexander Shulepov hospitalized after falling from a second-story window.

In a video on social media 10 days prior, the doctor protested having to still work even after testing positive for the coronavirus.

Shulepov remains in critical condition with a fractured skull and has been placed in intensive care.

The doctor, according to local media reports, appeared in the video alongside paramedic Alexander Kosyakin, who had also recently complained about a shortage of medical supplies.

Kosyakin received a warning from police not long after that he could face charges for “disseminating false information.”

Shulepov, prior to falling out of a window, later retracted his statements about having to work while COVID-19 positive. The sudden reversal led many local to believe that he was ordered to do so.

Despite Shulepov’s serious injury, he appears to be better off than two other doctors who also recently fell out of windows.

Yelena Nepomnyashchaya, the 47-year-old chief physician at a war veterans hospital in Siberia, fell from a fifth-story window on April 25 and died from her injuries.

Krasnoyarsk had reportedly complained earlier that same day about personal protective equipment (PPE) shortages and had pushed back on plans to turn a section of her hospital into a coronavirus ward.

Just one day earlier on April 24, a 48-year-old medical professional named Natalya Lebedeva died after suffering an “accident” outside of Moscow.

Lebedeva’s co-workers told local media outlets that she had fallen out of a window, as well. The suggestion was made that her death could have been a suicide due to claims that Lebedeva had been told that she inadvertently spread the coronavirus to several of her colleagues.

The deaths have led to widespread speculation online about whether there is more to the story given Russia’s historical treatment of critics, particularly under the rule of President Vladimir Putin.

At least one person pushed back on such the claims, however, labeling such suggestions as conspiratorial.

“No, spreading conspiracy theory about Putin throwing everyone out of the window is not good journalism,” @leonidragozin argued. “Is anyone genuinely interested in investigating the (quite possibly mundane) reality behind those deaths? Putin may even turn out to be guilty at some metaphysical level.”

Regardless of the facts, some Russian medical professionals may feel wary about criticizing their government’s response in the coming weeks.