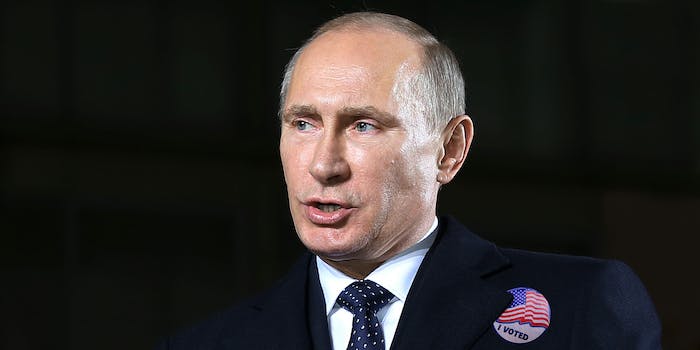 From Facebook to Pokémon Go: How Russia meddled in the 2016 election

Is there any internet platform Russia didn’t use in its plot to disrupt the 2016 election?

With all the moving parts and new reports bombarding us each week, it’s time to add a bit of clarity to this chaotic mess. Below, we’ve compiled a running list of the platforms Russian agents apparently used in its efforts and how they used them.

It’s important to note that simply because Russia reportedly used these platforms, that does not mean their efforts successfully swayed any votes. They might have, of course, but we’ll never know with certainty what effect Russia’s disruption efforts had—just that they existed.

Besides being rampant with fake news ahead of the election, the social media giant announced in September that it had sold $100,000 worth of ads to accounts connected to a notorious Russian “troll farm” that was seeking to target younger voters.

The first ads were sold in the summer of 2015 and mostly focused on divisive issues such as gun rights, immigration, LGBTQ rights, and racial discrimination. Roughly 3,000 ads—connected to 470 inauthentic accounts that were likely “affiliated with one another and likely operated out of Russia”—were found by Facebook and determined to most likely be connected to the Internet Research Agency, a Russian firm known to push pro-Russia propaganda, according to an investigation by Russian news outlet RBC.

In early October, Google said it had discovered evidence that Russian operatives purchased between $60,000 to $100,000 in ads across its various platforms, including search, Gmail, and YouTube, according to the Washington Post and New York Times.

Sources told the Post that the entities who purchased the ads through Google’s advertising platforms were likely not the same as those who purchased ads through Facebook. According to the Times, the bulk of the ads appeared alongside search results.

Google has also been asked to testify to testify before the Senate and House intelligence committees. The company has not yet said if it plans to do so.

Twitter has long struggled to rein in bots and other fake accounts on its platform, hundreds of which the company says are linked to Russian operatives.

Researchers have uncovered Russian-linked accounts promoting stories that push anti-American, anti-Hillary Clinton, and anti-leftist narratives, the New York Times reports. The aforementioned RBC investigation uncovered hundreds of accounts linked to Russian operatives, which the publication says were likely part of the Internet Research Agency’s alleged disinformation campaign. One of the suspected accounts, @TEN_GOP, amassed over 130,000 followers while posing as an account operating on behalf of the Tennessee Republican Party before Twitter shut it down, according to BuzzFeed News.

Like Facebook, Twitter will send staff members to testify before congressional committees on Nov. 1. The company has reportedly already turned over 201 accounts it believes are linked to Russia’s influence campaigns to Senate investigators, according to the Associated Press.

Not even the seemingly innocuous augmented reality game was safe from Russian influence. CNN reported in October that the game was used by a Russia-linked group posing as part of the Black Lives Matter movement using a campaign called “Don’t Shoot Us.”

The group used the game to encourage people to find and train Pokémon near areas where alleged incidents of police brutality occurred and give the creatures names of victims of such incidents. A contest was held by “Don’t Shoot Us” offering people Amazon gift cards if they won. It’s unclear if the ploy worked or if the group gave out any gift cards.

Although WikiLeaks denies any collusion with Russia, the U.S. intelligence community believes Russian operatives leaked emails stolen from the Democratic National Committee and Clinton’s 2016 campaign chairman, John Podesta, which the transparency organization published at the height of the 2016 election cycle.

Julian Assange, WikiLeaks founder, has repeatedly pushed back against accusations that its publication of DNC and Podesta emails were intentional efforts to sway the election against Clinton on Russia’s behalf. Regardless, the emails are believed to have benefited Russia—and the theory that WikiLeaks is in the bag for the Kremlin remains alive and well. In fact, Clinton herself accused Assange of being a “tool for Russian intelligence” during a recent interview.

The content distribution network Outbrain is investigating ads possibly purchased by Russian operatives on its network, BuzzFeed News reports. Unlike Facebook, Google, and Twitter, Outbrain has not yet said whether any Russian-linked ads were found on its platform.

Outbrain appears on countless sites across the web, including major destinations like CNN.com and others, including, at one point, the Daily Dot. Outbrain boasts that it reaches 557 million readers a month. The company said in a statement that it is “currently conducting a thorough investigation specific to election tampering.”