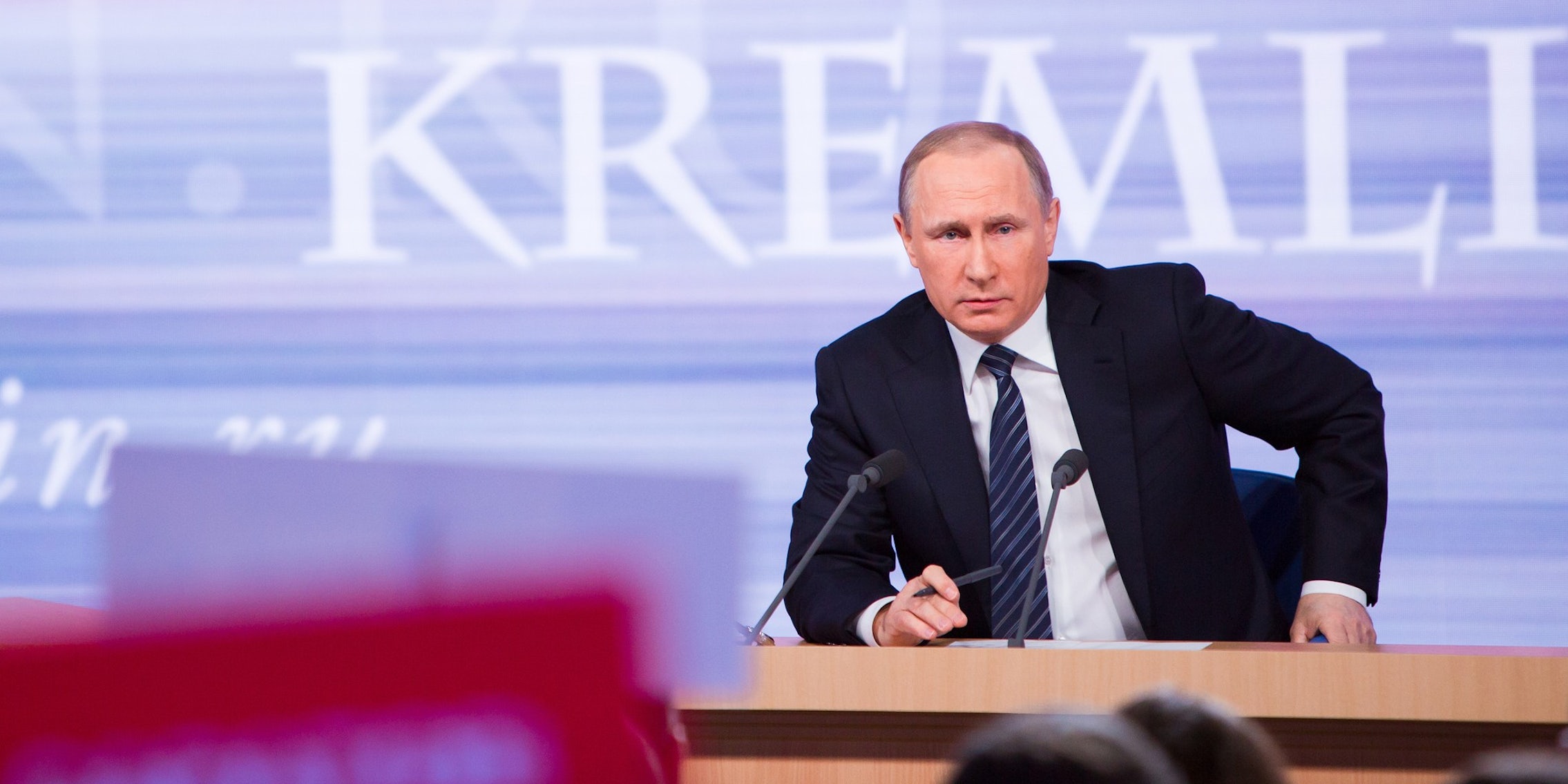 NSA, CIA, and FBI conclude with high-to-moderate confidence that Putin's goal was to aid Trump.

The 25-page report claims that the Russian government’s “influence campaigns” were carried out through a range of tactics, including cyberattacks and propaganda spread by Russia-controlled outlets and “paid social media users or ‘trolls.’” The intelligence community believes the goal was to harm Americans’ faith in the U.S. election process and to hurt Democratic nominee Hillary Clinton’s chances of getting elected and “help” President-elect Donald Trump’s “election chances when possible.”

“We assess Russian President Vladimir Putin ordered an influence campaign in 2016 aimed at the US presidential election,” the report reads. “Russia’s goals were to undermine public faith in the US democratic process, denigrate Secretary Clinton, and harm her electability and potential presidency. We further assess Putin and the Russian Government developed a clear preference for President-elect Trump.”

Released by the Office of the Director of National Intelligence (ODNI), the report was completed at the request of President Barack Obama. The Central Intelligence Agency (CIA), Federal Bureau of Investigation (FBI), and the National Security Agency (NSA) prepared the report.

The report states the intelligence community has “high confidence” in the report’s conclusions, meaning that senior U.S. intelligence officials believe the supporting evidence is nearly incontrovertible. Both the CIA and FBI are highly confident that Putin and the Russian government aspired to aid Trump’s election chances, while the NSA is said to have “moderate” confidence in this judgment.

The report further concludes that “Putin and the Russian Government aspired to help President-elect Trump’s election chances when possible by discrediting Secretary Clinton and publicly contrasting her unfavorably to him.”

The intelligence community believes “Putin most likely wanted to discredit Secretary Clinton because he has publicly blamed her since 2011 for inciting mass protests against his regime in late 2011 and early 2012.”

The report notes the intelligence community often cannot reveal the “full extent of its knowledge or the precise bases for its assessments” without compromising its sources or other intelligence-gathering methods. Therefore, the declassified report released Friday does not include “the full supporting information,” it says. A brief ODNI statement about the report noted that investigators discovered no evidence of vote tampering on the part of the Russian government. ODNI states, however, that it made no attempt to assess the impact “Russian activities had on the outcome of the 2016 election.”

Both the CIA and FBI are highly confident that Putin and the Russian government aspired to aid Trump’s election chances.

Trump, who claimed as early as Friday morning that focus on Russia’s attempts to influence the election were part of a “political witch hunt” by the president-elect’s opponents, conceded in a statement following his classified briefing on the report that Russia is one of a number of nations that wage cyber campaigns against the U.S., “including the Democratic National Committee.” However, Trump claimed that Russia’s actions had “absolutely no effect on the outcome of the election.”

“While Russia, China, other countries, outside groups, and people are consistently trying to break through the cyberinfrastructure of our governmental institutions, businesses and organizations including the Democrat National Committee,” Trump said, “there was absolutely no effect on the outcome of the election including the fact that there was no tampering whatsoever with voting machines.”

The GRU, Russia’s military intelligence agency, is said to have used WikiLeaks (in addition to the website DCLeaks.com and the mysterious Guccifer 2.0 persona) to propagate information originally stolen by Russian hackers. “Moscow most likely chose WikiLeaks because of its self-proclaimed reputation for authenticity,” the report says. “Disclosures through WikiLeaks did not contain any evident forgeries.”

The report claims that the GRU “probably” began its cyber operations against U.S. political entities in March 2016. It says “email accounts targeted by the GRU in March 2016 appeared on DCLeaks.com starting in June.” Guccifer 2.0 is believed to have provided the emails to DCLeaks.

Several pages of the report focus on what the intelligence community calls a “propaganda effort” led by state-run Russian news agencies, including RT News and Sputnik. The report is critical of the relationship between Assange and RT News, where the former hosted a program beginning in early 2012. After Assange met with RT’s editor-in-chief in August 2013 to discuss renewing his contract, RT declared itself “the only Russian media company” to partner with WikiLeaks and reportedly received access to “new leaks of secret information,” the report notes.

RT News and Sputnik International did not immediately respond to a request for comment.

The report suggests that in June 2016, around the time of the Republican National Convention, Putin began purposefully distancing himself from Trump, aware that praise from the Russian leader might be detrimental to Trump’s campaign. “Trump’s stated policy to work with Russia, and pro-Kremlin figures spoke highly about what they saw as his Russia-friendly positions on Syria and Ukraine,” the report states, adding that Moscow likely viewed Trump’s victory as a way to “achieve an international counterterrorism coalition” against ISIS.

Sen. Mark Warner (D-Va.), vice chairman of the Senate intelligence committee, called on the U.S. to develop a “robust cyber strategy” to prevent foreign actors from tampering with the American election process.

“The strength of America’s democracy will be measured, in part, on how we respond, and the steps we take to develop a robust and proactive cyber strategy, including tools and capabilities to deter and effectively respond to future attempts by foreign actors to influence America’s democratic process,” Warner said.

Rep. Adam Schiff (D-Calif.), the ranking Democrat on the House Intelligence Committee, emphasized a need to prevent foreign influence on the U.S. election process while condemning Trump’s claim that Russia’s actions had “absolutely no effect” on the outcome of the election.

“The president-elect’s statement that the Russian hacking had ‘absolutely no effect on the outcome of the election’ is not supported by the briefing, report, or common sense,” Schiff said. “It is one thing to say that there was no tampering with vote tallying—which is true—it is another thing to say that the daily dumping of documents disparaging to Secretary Clinton that was made possible by Russian cyber operations had no effect on the campaigns.”

In a statement, House Speaker Paul Ryan (R-Wisc.) condemned Russia’s attempts to tamper with the U.S. election process while asserting that Trump won the election “fair and square.”

“Russia has a track record of working against our interests, and they clearly tried to meddle in our political system. I strongly condemn any outside interference in our elections, which we must work to prevent moving forward,” Ryan said.

“We must also be clear that there is no evidence that there was any interference in the voting or balloting process. We cannot allow partisans to exploit this report in an attempt to delegitimize the president-elect’s victory.”