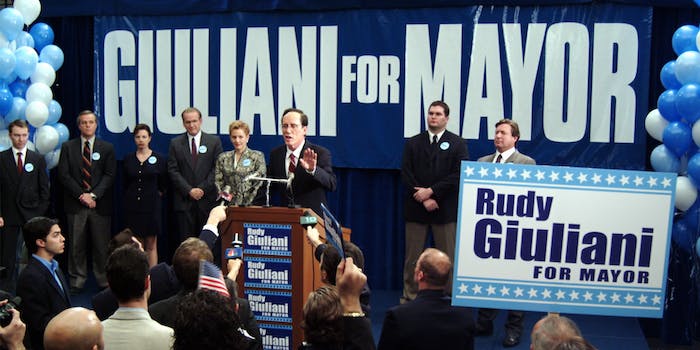 This clip from 'Rudy: The Rudy Giuliani Story' is iconically awful.

Who better to play Rudy Giuliani in a made-for-TV movie than conservative Twitter troll James Woods? Truly, it’s a match made in hell. Rudy: The Rudy Giuliani Story didn’t exactly make waves when it aired on the USA network in 2003, but it’s resurfacing now because Giuliani is, as they say, having a moment. And not in a good way.

This long-forgotten movie is trending on Twitter thanks to an agonizingly cringeworthy clip that someone filmed off their TV. It shows Giuliani sharing a romantic stroll with his love-interest, discussing his political career with a level of sincerity that the real Giuliani has never publicly achieved. If you can make it all the way through this 71-second scene, congratulations.

This really is a relic of Giuliani’s dubious post-9/11 heyday. We’re clearly meant to see Giuliani as an inspiring, West Wing-style bipartisan hero, but James Woods’ performance bears no resemblance to the man we know today: a Trump loyalist who spouts right-wing conspiracy theories, gets humiliated by Borat, and makes incoherent public statements while hair dye drips down his face.

After a prolific career including celebrated films like Once Upon a Time in America and Casino, James Woods is now increasingly known for his scandals. He’s been accused of sexual misconduct and preying on teenage girls, and was dropped by his talent agency in 2018—a choice that Woods attributed to his conservative politics. Woods also has a notoriously abrasive Twitter presence, using his platform to share far-right hoaxes and offensive comments that led Twitter to suspend his account several times. So he’s not exactly unused to trending for bad reasons.

Incidentally, Woods received an Emmy nomination for his role in Rudy: The Rudy Giuliani Story. 2003 was a dark time indeed.