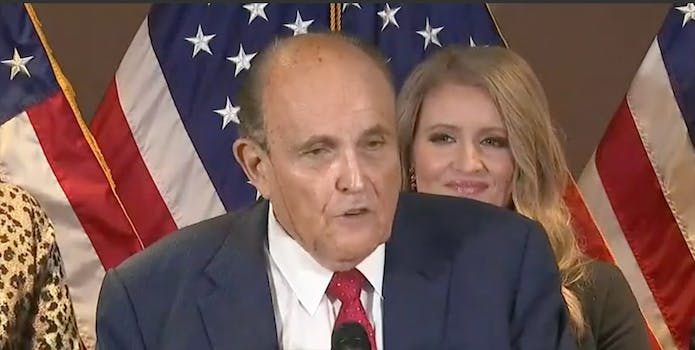 President Donald Trump’s lawyer Rudy Guiliani quoted the movie My Cousin Vinny in a press conference that intended to discount the 2020 election results. People also noticed what appeared to be hair dye dripping down his face as he sweated through his speech.

Guiliani was recently added to the president’s legal team.

The theory has been debunked by state courts, Politico, and other experts. A fact page on the false claim can be found on Twitter as Trump continues to spread the misinformation.

But Guiliani likend Republican poll watchers to the scene in the film My Cousin Vinny where the defendant could not read Vinny’s fingers from the back of the court room.

“Did you all watch ‘My Cousin Vinny?'” Guiliani began. “It’s one of my favorite law movies because he comes from Brooklyn. And when the nice lady said she saw and he said ‘how many fingers do I got up?’ And she says three. Well, she was too far away to see that it was two. Well, these people were further away than ‘My Cousin Vinny’ was from the witness. They couldn’t see a thing.”

Guialini describes that Republican poll watchers were “put in a corral so far away” that proper monitoring could not be done.

State Supreme Courts, where the Trump campaign is arguing this, have thrown away Republican’s arguments. For example, in Pennsylvania, the court ruled that election officials did not violate the law as Trump’s lawyers argued on Tuesday.

“Critically, we find the Board’s regulations as applied herein were reasonable in that they allowed candidate representatives to observe the Board conducting its activities as prescribed under the Election Code,” the majority opinion read.

Regardless, Trump and his allies still maintain foul play. And Guiliani’s analogy has a lot of the internet laughing.

“i did not have Rudy Giuliani acting out a scene from My Cousin Vinny during a press briefing on voter fraud on my 2020 bingo card,” one added.

Other people on Twitter noticed Guiliani’s physical appearance during the press conference.

“It appears that Rudy Giuliani is sweating through his hair dye,” the Recount posted.

And the memes quickly followed.

“If Giuliani keeps sweating he’s gonna get in trouble for blackface,” another added.

Trump has yet to concede the election based on these claims of voter fraud which have yet to be proven almost two weeks after the election was called for Biden.

Now all Trump has left is Guiliani sweating it out on live TV.