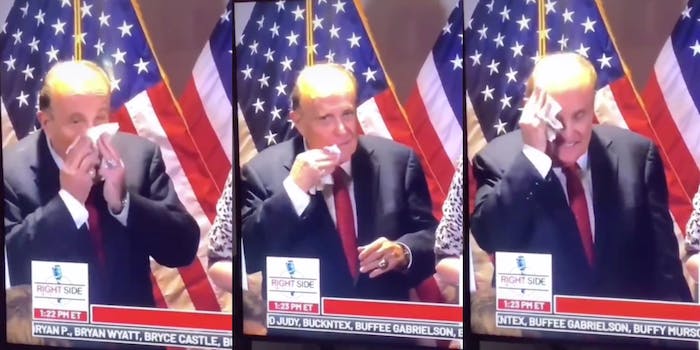 His colored sweat wasn't the only thing that caught the internet's attention this week.

A video of Rudy Giuliani with streaks of brown-colored sweat dripping down the sides of his face took the internet by storm recently. But that’s not the only video of Giuliani people online are getting grossed out by.

At a press conference on Thursday, President Donald Trump’s personal lawyer was caught blowing his nose with what appears to be a handkerchief. The Centers for Disease Control and Prevention (CDC) recommends throwing tissues in the trash after use (while it doesn’t clarify, that probably means single-use). Giuliani, however, didn’t stop there. After blowing his nose, he proceeded to wipe his lips and then the rest of his face with the same side of the cloth.

Viewers are pretty grossed out. “I will never be able to look at Rudy Giuliani again and not see him wiping his snot drenched handkerchief all over his face, head, and hands,” one viewer declared. “Every time I see his picture scroll past, I throw up a little in my mouth.”

Giuliani was also filmed with dark sweat streaks running down his face at Thursday’s press conference. Viewers initially thought the substance was demi-permanent or semipermanent hair dye. But to make matters worse, hairdressers are now claiming the mysterious substance was “probably not hair dye.”

As the New Yorker put it, Giuliani has been nothing short of a “hot mess” lately. In addition to the viral videos, the lawyer was recently caught in a compromising scene in Borat 2. He then infamously was the frontman for the press conference held at Four Seasons Total Landscaping after the Trump team seemingly accidentally booked the wrong venue and just rolled with it. And at the same press conference Giuliani’s handkerchief met all parts of his face before he appeared to “melt,” the lawyer controversially peddled voter fraud conspiracy theories.