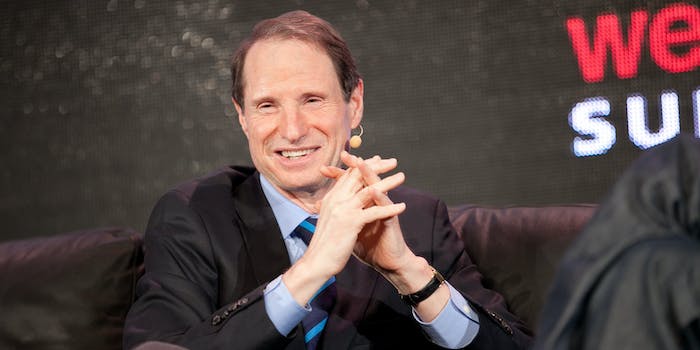 'Mr. Zuckerberg is going to have a couple of very unpleasant days before Congress next week.'

Oregon Sen. Ron Wyden minced no words in his warning to Facebook CEO Mark Zuckerberg as he prepares to testify before Congress this week.

Zuckerberg will appear before the House Energy and Commerce Committee on Wednesday at 10am ET. The committee wants to discuss “the company’s use and protection of user data” following the fallout from reports that Cambridge Analytica harvested data from more than 50 million Facebook users without their knowledge.

“Mr. Zuckerberg is going to have a couple of very unpleasant days before Congress next week and that’s the place to start,” Wyden, a Democrat, warned Friday at Oregon’s TechFestNW conference, TechCrunch reports.

“There are going to be people who are going to say Facebook ought to be broken up,” the senator continued. “There have been a number of proposals and ideas for doing it and I think unless [Zuckerberg] finds a way to honor the promise he made several years ago, he’s gonna have a law on his hands.”

Wyden wants to put an end to Zuckerberg’s hiding the details of Facebook’s data sharing procedure in the company’s fine print.

“I think we got to establish a principle once and for all that you own your data, period,” Wyden said. “What does that mean in the real world? It’s not enough for a company to bury some technical lingo in their [terms of service]… It’s not enough to have some convoluted process for opting out.”

The Cambridge Analytica scandal has dealt a huge blow to Facebook’s reputation, along with the reputation of its creator. Since news of the data harvesting broke, millions of users have deactivated their accounts and launched the #DeleteFacebook trending hashtag.

Wyden believes this moment of vulnerability may be the perfect opportunity to push for privacy reform.

“If there is a grassroots uprising about the issue of who owns user data, we can get it passed,” the senator said, adding that social networks should obtain “explicit consent” from users before sharing their data with anyone, including advertisers.

“It’s real basic. You have to give the OK for them to do anything with your data,” Wyden said. “These companies have not gotten their heads around the idea that the data they collect is more than just their property.”