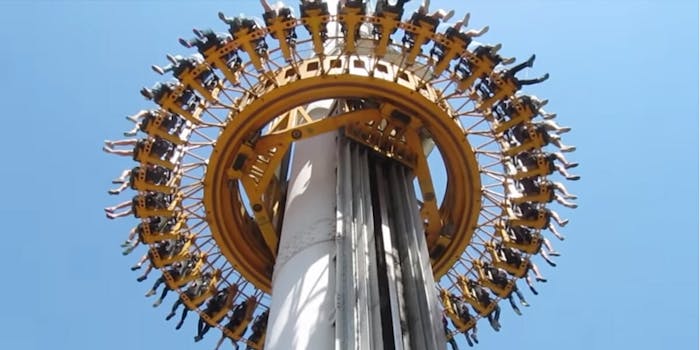 That viral clip of a theme park ride isn’t real

The fake footage is based on South Korea's 'Gyro Drop' ride.

Video of a death-defying amusement park ride has gone viral on Twitter, receiving more than 1 million views in just a single day. Unfortunately, though, the video is completely fake.

Shared on Thursday by a Twitter user known as Vince, the clip shows a group of ride-goers being shot hundreds of feet into the air before being spun around on retractable swings.

The footage is, however, based off of an actual ride in South Korea known as the Gyro Drop. While similar, the real ride, located at the Lotte World amusement park, appears much less dangerous.

While some on Twitter seemed convinced the video was legitimate, others pointed to actual videos of the Gyro Drop to debunk the viral clip.

Currently, it remains unknown who first shared the video or who actually created it. The clip has been spread by multiple Twitter accounts likely seeking momentary viral fame.

Fake videos of over-the-top amusement park rides have been a big thing online for years.

If it seems too absurd to be true or looks like it has ’90s-era computer graphics, then it probably is.