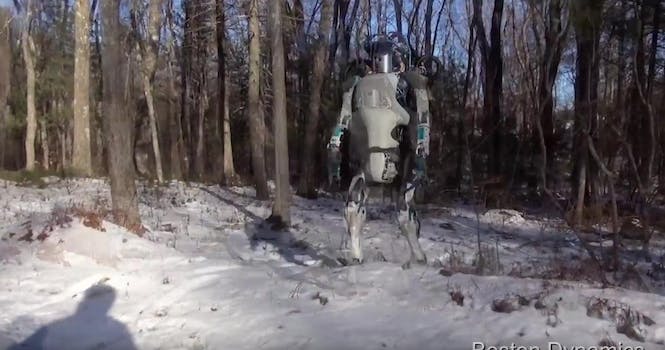 Boston Dynamics is best known for occasionally uploading videos of its outstanding, slightly disturbing, futuristic robots. Its latest model, Atlas, is a bipedal, porcelain-white robot that can do things like lift boxes, open doors, and right itself if it falls over.

Atlas is super impressive! But it’s also a little worrying, because even with it in its cast-off, prototypical state, you still feel the dread of that impending uncanny valley.

One YouTube user, Mr. King, has done his part to help soften the blow. Here is Atlas with a “profanity mod” installed.

Isn’t it funny how a soulless machine becomes so much more approachable and friendly when it sports a human voice? When it reacts to some asshole poking it with a stick the same way we would?

All of a sudden, we’re much less worried about the impending and inevitable robot uprising than we were before.