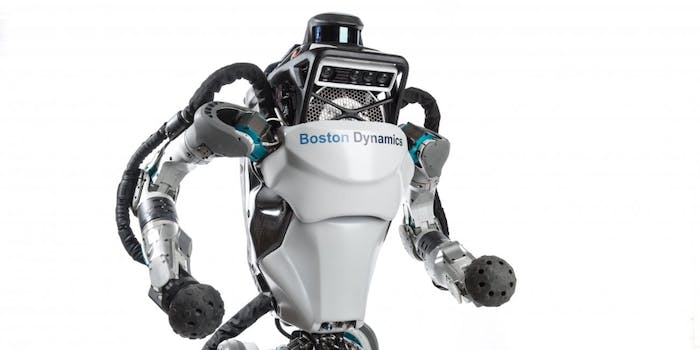 In a recent onstage demo at the Congress of Future Science and Technology Leaders, Boston Dynamics’ Atlas robot made a miscalculation… and fell offstage. Since it’s 2017, an audience member captured the moment on video and posted it to YouTube (naturally).

If you’re one of those anxiously awaiting Judgement Day (as proposed by the Terminator franchise), you may greet the below clip with cheers and applause. Haha, navigate that, Atlas! However, for those of us that empathize with Atlas’ on-stage snafu, the tumble may make you cringe.

You can catch the demonstration in the video below. In it, the Atlas robot uses its computer vision and built-in cameras to identify objects (such as a box) then lift them with its arms. After performing its task, the robot then makes to walk offstage but accidentally hits a light at the back of the platform. The robot trips and then tumbles offstage. If you want to skip straight to the action, head to the 4:00-minute mark.

Boston Dynamics is responsible for some of the most advanced, impressive, and terrifying robots in existence. This one, for example, can lift items and jump over obstacles while speeding around on a pair of wheels. The company’s 160 pound, four-legged Spot robot, by comparison, is almost cute. Boston Dynamics is perhaps most famous for its quadrupedal, rough terrain Big Dog robot. Atlas is billed as “the most dynamic humanoid” robot. Google acquired Boston Dynamics back in 2013, but in June, it approved the sale of the company to SoftBank.

Interestingly, as the Next Web points out, the whole event took place more than a month ago but hasn’t yet garnered much internet attention. Well, we just can’t let that stand.