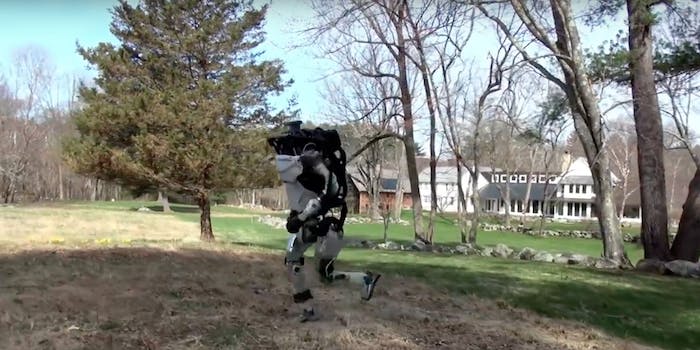 Boston Dynamics continually amazes us with the feats of its robotic cohort. In February, we watched in abject horror as its four-legged SpotMini robot opened and scooted around doors with ease. And back in November, its bipedal Atlas robot showed off its sweet gymnastics skills. Now, we’ve got video of Atlas’ latest accomplishments: running and jumping.

While it may sound anticlimactic compared to Atlas’ flipping capabilities, as with all Boston Dynamics videos, it is thoroughly enjoyable to behold. (If not somewhat terrifying.)

In the video above, Atlas runs up a hill and then successfully jumps over a log.

Boston Dynamics first introduced its humanoid Atlas robot to the world two years ago, after making a name for itself with the antics of its Spot robot. Atlas is 4.9 feet tall and weighs just over 165 pounds. It has a high strength-to-weight ratio—it can handle payloads over 24 pounds—and also has phenomenal balancing capabilities.

While Atlas’ feats are, for the most part, astounding, the two-legged robot has also had its fair share of faux pas. Last year it accidentally fell offstage during a demo at the Congress of Future Science and Technology Leaders. While Atlas doesn’t speak (thank goodness), some YouTubers have edited videos to make the robot swear, which makes the bot a whole lot more entertaining and a whole lot less terrifying.

At this point, however, there seems to be very little that Atlas can’t do. It’ll be interesting to see what Boston Dynamics trains its humanoid robot to do next.