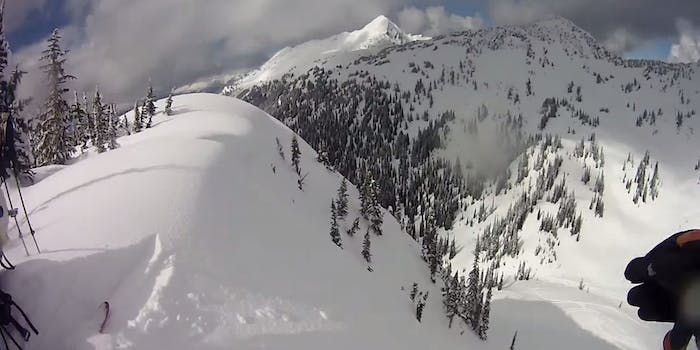 'Please tell me this was a parody.'

An avalanche video has gone viral on Twitter, and people are freaking out.

The video shows a family simply sitting and watching an avalanche hurl toward them. Many people were upset that the family only ran away at the last minute, and the father appeared to have left behind his wife and children.

Luckily, everyone can breathe a sigh of relief.

The video is fake and is actually from a Swedish movie called Force Majeure. The clip from the film was posted by comedy writer Ziwe Fumudoh, with the caption, “This is exactly how America reacts to global warming.”

this is exactly how america reacts to global warming pic.twitter.com/cgsb8xk9t3

Understandably, people began to take the video literally, and the clip quickly spread across the internet.

please tell me this was a parody.
did he really LEAVE his wife and kids behind?
…I'm afraid to laugh…may I laugh?

It's only a little reassuring to find out it's a movie. Seems all too plausible!

However, those who actually believed the video failed to read the comments, most of which were disclaimers about how the clip was from a movie.

That movie haunts me still. It moves slow, but that scene, and the heaviness that ensues after it… wow. And the last five minutes… almost unbearable tension from a strange source. Fascinating film.

The film Force Majeure is about the father who left his family behind in this scene, and how that created tension in the family. An American remake is in the works with Will Ferrell and Julia Louis-Dreyfuss.

If you haven’t already seen this film, watch it immediately. It’s called FORCE MAJUERE (2014), and it’s a masterpiece from Sweden. Against all good taste, it’s currently being remade as a drama-comedy called DOWNHILL, starring Will Ferrell and Julia Louis-Dreyfuss.

But that didn’t stop people from commenting on how this scene is representative of climate change and how Americans typically react toward it.

"Don't worry kids, the free market will work this all out."