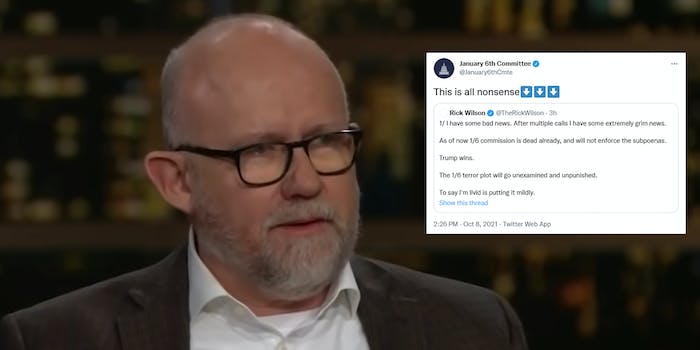 Did all of Congress change course because of 10,000 faves on Twitter?

You can be forgiven if you forgot the Lincoln Project still existed. The coterie of Republicans and centrists that banded together to protect American democracy imploded spectacularly in early 2021 under accusations of grifting, huckstering, and for employing, and protecting a known pedophile and sexual harasser in its ranks.

But though it probably should have, the organization didn’t completely disappear. It still is sending press releases about TV buys for ads no one sees and trying to juice hashtags on Twitter.

One of its founders, noted hypocrite and former Confederate flag-waver Rick Wilson is also still around, picking fights on Twitter and spewing out nonsense.

Today, Wilson dropped a melodramatic thread about the end of democracy as he fretted that former President Donald Trump’s closest advisers would ignore subpoenas from the House of Representatives Jan. 6 Committee and that the committee would do nothing to enforce them.

Trump has reportedly told his closest advisers to ignore the subpoenas. The House is investigating their role in fomenting the violence at the U.S. Capitol that day.

“I have some bad news. After multiple calls I have some extremely grim news,” he wrote, calling the news bad twice. “As of now 1/6 commission is dead already, and will not enforce the subpoenas.”

Wilson, who spent his entire life whipping the Republican party into the frenzy that led to Trump, then balked when he found Trump to be too crude, was “livid” about the news.

Wilson continued to fret, saying the Jan. 6 riot was an unpunished coup and training exercise (almost 700 people have been arrested) that would lead to a successful attempt if these subpoenas weren’t enforced.

It got enough traction that the committee responded to it. “This is all nonsense,” they wrote.

The committee also put out a statement saying it would enforce subpoenas.

“We will not allow any witness to defy a lawful subpoena or attempt to run out the clock, and we will swiftly consider advancing a criminal contempt of Congress referral,” the statement said.

Wilson, for his part, implied that he’d managed to get the committee to change course via penning a Twitter screed.

And while it seems unlikely the entire House committee changed course on enforcing subpoenas because of 10,000 likes online, Wilson nonetheless immediately began fundraising off it.