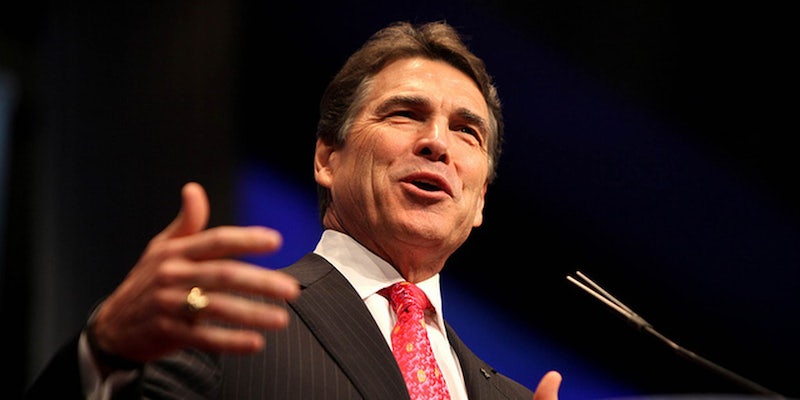 The 6 most homophobic things Rick Perry has ever said

Rick Perry announced his bid for president Thursday. Here's why that's a problem.

Former Texas Gov. Rick Perry announced via Snapchat Thursday that he plans to run for president on the 2016 Republican ticket, thereby throwing his hat into a ring full of seemingly every Republican politician who has ever existed. His apparent attempt to attract younger voters via Snapchat, however, might not get Perry very far, considering his track record of extremely homophobic statements.

These days, even the majority of Republican voters under age 30 favor the legalization of same-sex marriage. That means right-leaning candidates are more likely to be successful if they at least pretend to support the LGBT community. Unfortunately for Rick Perry, this list of publicly stated fumbles could become a problem at next year’s ballot box.

This quote came from a June 2014 speech in San Francisco.

“Whether or not you feel compelled to follow a particular lifestyle or not, you have the ability to decide not to do that. I may have the genetic coding that I’m inclined to be an alcoholic, but I have the desire not to do that, and I look at the homosexual issue the same way.”

2) The gay grinch who stole Christmas

“There’s something wrong in this country when gays can serve openly in the military but our kids can’t openly celebrate Christmas.”

“The Boy Scouts of America has been built upon the values of faith and family for more than 100 years. And today’s decision contradicts generations of tradition in the name of political correctness. While I will always cherish my time as a scout and the life lessons I learned, I am greatly disappointed with this decision.”

Perry was governor of Texas when the Supreme Court struck down the state’s anti-sodomy law in 2o03. His annoyed response (from his 2010 book Fed Up!):

“Texans have a different view of the world than do the nine oligarchs in robes.”

After accidentally saying that New York state’s pro-gay marriage law was “fine by me,” Perry backtracked and clarified his hatred of the concept on a Christian radio interview.

6) Pray the gay away

OK, this wasn’t so much a statement as a rally to which Perry invited a number of vehemently anti-gay organizations that equate homosexuality with Nazism, helped incite a violent anti-gay movement in Uganda, and blamed gays for the Holocaust. The Los Angeles Times called Perry’s Day of Prayer “misguided.”