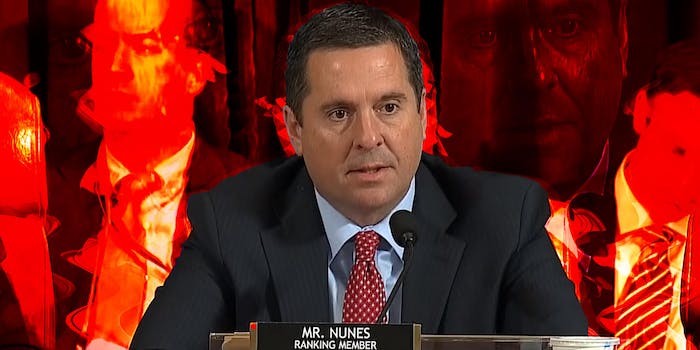 Debunking the right-wing conspiracy theories from the impeachment hearing

The grandstanding did a great deal to cloud the proceedings.

As the ranking member of the House Intelligence Committee, Rep. Devin Nunes (R-Calif.) helps to set the tenor of Republican opposition to the impeachment against President Donald Trump, which began in earnest on Wednesday.

And as has been standard with Republicans during this entire process, Nunes used his opening statement not to drill down into tough questions about what exactly happened between Trump and Ukraine, but to spout conspiracy theories about Ukraine meddling in the 2016 election with the help of Joe Biden and a cybersecurity firm called Crowdstrike, and pinning it all on Russia.

To the unaware, Nunes’ barrage of conspiracy theories seems impenetrable and bizarre. But these theories are the same ones that Trump himself has used as justification for holding up military aid to Ukraine.

And they’ve been driving conservative media responses to the impeachment inquiry since it began.

This line of Nunes questioning might sound like a series of jumbled conspiracy theories, boomer memes, and random snippets from YouTube compilations—and that's because it is.

This is the native language of right-wing conspiracy sites. This is completely coherent to his audience.

Here are some of the many conspiracy theories Nunes touched on in his opening statement, and whether they have any truth to them.

Nunes: Dems honed in on “fabrications of Trump-Russia collusion from the Steele dossier.”

What is the Steele Dossier?

This is the document put together by former British intelligence agent Christopher Steele with opposition research about then-candidate Donald Trump’s financial and personal ties to Russia.

It began with the hiring of research firm Fusion GPS by Republicans to find compromising information on Trump, and its funding continued when the Democratic National Committee picked up the project. Many of its most infamous claims, including the “pee tape” allegation, remain unconfirmed, while other claims have been verified to some extent.

It did not start the FBI or Special Counsel’s investigations into Trump’s links to Russia, it merely served as evidence.

What is “the server?”

Nunes didn’t mention the DNC server in his opening remarks, but he’s mentioned it other times, and it’s a critical part of the Trump inner circle’s conspiracy theories. All of it related to the hack on the DNC’s information infrastructure in summer 2016, with the contents released by WikiLeaks shortly before the election.

Every American intelligence agency agreed that it was Russia that carried out the hack, with Robert Mueller’s team indicting members of Russian intelligence for the act. Yet Trump and his inner circle continue to insist that Russia did not carry out the hack, but that it was Ukraine that did it, and is physically hiding both the server and the stolen emails somewhere in the nation. In reality, the DNC didn’t have one single server, but over 140, most of the data of which were based in the cloud.

We already know what @realDonaldTrump did because WE HAVE THE JULY CALL TRANSCRIPT. It's not like @POTUS pressured Ukraine to investigate DNC server & Biden, and Guiliani & Sondland said investigate Amazon & Warren. EXTORTION WAS IDENTICAL. THEY WERE CARRYING OUT TRUMP'S INTENT. https://t.co/Ubv5EHSya9

Nunes: Dems are “Trying to obtain nude pictures of Trump from Russian pranksters”

Nunes has made several references to Democrats “colluding” with Ukraine to obtain pictures of the president without clothes.

In reality, this is a dig at Intelligence Committee chair Rep. Adam Schiff (D-Calif.), who was briefly pranked by two Russian comics posing as Ukrainian officials who got Schiff to tell them to send their “nude pictures” to the FBI.

Nunes: This is a “closed-door audition process in a cult-like atmosphere in the basement of the Capitol.”

As with other investigations, initial hearings were held in the secure SCIF facility underneath the Capitol.

The hearings were closed off to everyone not on the relevant committees, and fellow Republican Rep. Matt Gaetz (R-Fla.) and other GOP members made a spectacle of “storming” the SCIF and pretending they weren’t allowed to know what was happening. Many of the Republicans who tried to get into the SCIF were actually on the relevant committees and could have attended any of the hearings.

Nunes: “Alexandra Chalupa, a contractor for the Democratic National Committee who worked with Ukrainian officials to collect dirt on the Trump campaign, which she provided to the DNC and the Hillary Clinton campaign.”

Who is Alexandra Chalupa?

The former DNC consultant referenced by Nunes has been a constant critic of the Russian government. The “dirt” Nunes alleges she dug up wasn’t about the Trump campaign, but the conduct of former Trump campaign manager Paul Manafort, and in particular, his ties to money laundering and Ukraine’s previous government.

Chalupa has denied colluding with Ukrainian officials or being tasked with performing opposition research for the DNC, but she’s a target for Kremlin-fueled conspiracy theories. Chalupa had also worked in the White House Office of Public Liaison during the Clinton administration—giving her ties to Hillary Clinton, which many Trump defenders see as enough reason for her to collude with Ukraine against Trump.

Republicans are trying to get her to testify in the impeachment hearings.

Nunes: “They are trying to impeach the president for inquiring about Hunter Biden’s activities.”

What did Hunter Biden do wrong?

Like the children of many other high-profile politicians, Hunter Biden was given a position on the board of a foreign corporation for lobbying purposes.

Hunter Biden’s role on the board of Ukrainian gas company Burisma has become a focal point for right-wing conspiracy theories due to his father Joe Biden’s advocacy for a top Ukrainian prosecutor to be fired for investigating the company.

But Hunter Biden played only an advisory role with Burisma, and there’s no evidence he had any role in the investigation into the company, or that the company carried out any wrongdoing. The investigation was closed with no findings against the company and it was already over when the prosecutor in question was fired.

Nunes didn’t mention it today, but it’s a major part of the “Ukraine hacked the DNC” conspiracy theory that he and other prominent Republicans cling to.

Crowdstrike is the cybersecurity firm hired by the DNC to investigate the Russian hack of its servers in 2016. It provided digital images of the hacked servers to the FBI, leading to a separate conspiracy theory that the investigation wasn’t properly carried out because the FBI never took physical possession of the server—which it had no reason to do, and would not have been helpful. Despite the president’s linking of CrowdStrike with the hacking conspiracy, the company is based in California, not Ukraine, and has no link to Ukraine other than the fact that one of its co-founders, a Russian-American security expert, once sat on an advisory board with a Ukranian oligarch.

George Kent, senior State Department official in charge of Ukraine: "To be honest, I had not heard of Crowdstrike until I read this transcript.."

He says it's "amply clear" it was Russia, not Ukraine, that interfered in the 2016 election.

Nunes: “The whistleblower was acknowledged to have a bias against President Trump, and his attorney touted a ‘coup’ against the President.”

Mark Zaid, the attorney for the whistleblower, did indeed tweet that a “coup has started” when Trump fired acting Attorney General Sally Yates in early 2017, due to Yates refusing to carry out the Trump administration’s travel ban. The tweet was dug up by conservative media and is now all over their outlets as proof that the whistleblower is a hyperpartisan Trump opponent.

It was not referencing starting a coup, but rather saying Trump’s actions were dictatorial.

Zaid has called the conservative firestorm over the tweet a distraction from the whistleblower’s accusations.

Did Ukraine meddle in the 2016 election?

Despite Nunes’ continual references to “Ukranian election meddling,” there’s no evidence so far that it did, and it’s not clear what Nunes believes actually took place. Chalupa’s contacts with Ukrainian officials were limited to information on Manafort’s ties to Russia (later proven to be money laundering that was prosecuted by Mueller) while U.S. intelligence officials have still never found any indication that anyone other than Russian hackers carried out the DNC attack.

But if their goal was to muddy the waters, they certainly did.