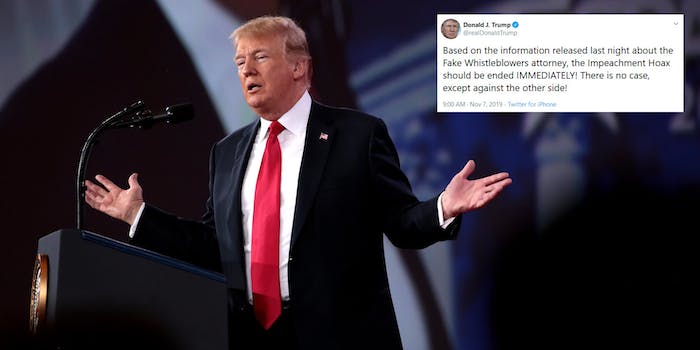 Trump spoke about the tweets at a rally in Louisiana on Wednesday night.

President Donald Trump on Thursday tweeted that the impeachment proceedings against him should end “immediately” because of old tweets written by the Ukraine whistleblower’s lawyer Mark Zaid.

On Wednesday night during a rally, Trump read old tweets from Zaid where he wrote that a “coup has started” in the aftermath of Trump firing then-acting Attorney General Sally Yates.

“A lot of things have happened… I don’t know if you saw, I’m coming off the plane and they hand me—look at this character—ok, they just hand me this story. ‘Coup has started whistleblower’s attorney said in 2017’ you know when that was? It was a long time ago. It’s all a hoax. They say January 2017 a ‘coup has started’ and the impeachment will follow ultimately. It’s all a hoax, it’s a scam,” Trump said at a rally in Louisiana.

“From the lawyer, a sleezeball, it said ‘I predict @CNN will play a key role in @realDonaldTrump not finishing out his first term.’ Can you believe this? This is a hoax, and this was done a long time ago.”

On Thursday morning, Trump referred to Zaid’s tweets in his own post, calling for the impeachment proceedings to end “immediately.”

“Based on the information released last night about the Fake Whistleblowers attorney, the Impeachment Hoax should be ended IMMEDIATELY! There is no case, except against the other side!,” the president wrote on Twitter.

Based on the information released last night about the Fake Whistleblowers attorney, the Impeachment Hoax should be ended IMMEDIATELY! There is no case, except against the other side!

The tweets mentioned by Trump were written by Zaid in January 2017 and July 2017.

In statements to Law & Crime, Zaid said the old tweets coming up was “nothing more than the continuing partisan deflection to desperately avoid discussing the substance of my client’s whistleblower complaint.”

“In the time since that tweet was posted, which was referring to lawyers serving as the force of good to prevent this president from doing harm to our democracy, I’ve probably represented more Republicans, including White House officials, than Democrats,” Zaid told Law & Crime. “This is nothing more than the continuing partisan deflection to desperately avoid discussing the substance of my client’s whistleblower complaint.”