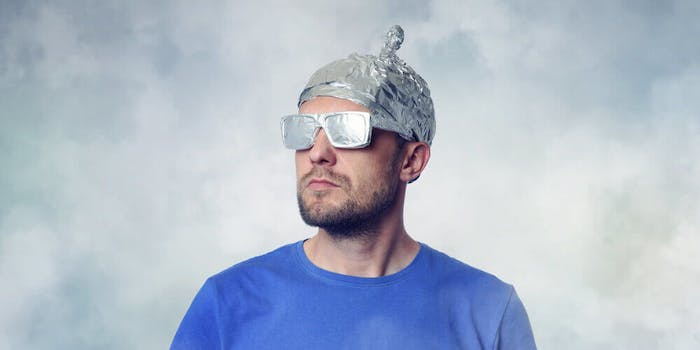 It’s been two months since the nameless conspiracy theory avatar called QAnon posted one of their cryptic drops on the message board 8chan. A lot’s happened since then—and fans are choosing their own adventure.

For one, Q’s final drop, hinting that a mass declassification of documents would occur after the 15th of the month, fizzled out. Beyond that, 8chan was dropped by its security platform and was immediately taken down. And finally, the “stable genius” hero of the QAnon mythology, President Donald Trump, could be impeached after a whistleblower exposed obvious abuses of power on a call with Ukraine.

Such a crushing series of disconfirmations would seem to be the death blow to even the hardiest of conspiracy theories. But the so-called Q, purporting to be a high-level official working with or within the White House, has shown an almost superhuman ability to thrive after disconfirming events and failed predictions. The newly opened impeachment inquiry, the Ukraine controversy, even the loss of 8chan—all have been folded into the Q story by the gurus who interpret the Q drops.

The QAnon movement sees Trump as a secret genius whose every move is planned far in advance in order to keep the deep state off balance and get it to expend “ammo” to take him down. So it’s no surprise that they see impeachment not as a threat to the presidency, but as an elaborate trap set by Trump for the Democrats to walk into and destroy themselves.

How do you catch a FISH?
Use BAIT?#ReleaseTheTranscript #Trump2020

Q has referenced impeachment dozens of times, going all the way back to one of the first posts in October 2017. While initially, Q claimed that Trump was “100% insulated with zero risk of impeachment (fact)” it appears that Q now believes it’s part of Trump’s plan to destroy the deep state and the Democratic Party all along.

How are the Democrats going to be destroyed by impeaching Trump? Because Q is a constant struggle to expose documents and classified information that “they” don’t want exposed. And a series of public hearings and a trial in the Senate will do just that—because according to Q, Democrats know that there’s no chance Trump will be removed after a Senate trial.

“You are watching D’s ‘con’ liberal base using ‘hope’ tactics while maintaining ‘POTUS obstruction of Justice’ FAKE NEWS narrative” Q intoned in July, the poster’s last reference to impeachment. So to Q, Democrats know impeachment will fail but are doing it, as another Q drop puts it, to “JUSTIFY FAKE INVESTIGATIONS AND TAKE IN DONOR SUPPORT. [sic]” And Trump also knows that Democrats have no chance to remove him but are letting the Democrats try to trick their base, which will backfire and result in Trump’s reelection.

If it all sounds hopelessly complicated, that’s by design. The more gibberish a conspiracy theory entails, the more believable it is to those who buy into it.

Very interesting theory on #impeachment and what could transpire if the House votes to impeach.

The Ukraine call, where Trump dangled the prospect of selling anti-tank missiles in exchange for dirt on Joe Biden, is also looked at as one of these 12-dimensional chess moves that makes no sense to anyone not steeped in the language of fringe beliefs.

It’s important to note that Trump didn’t ask the “favor” for information on Biden, but in reference to “the server” and “CrowdStrike.” These are terms that should be familiar to anyone who either pays attention to right-wing conspiracy theories or who has taken a deep dive into the Mueller Report. CrowdStrike is the San Francisco-based cybersecurity firm that the Democratic National Committee contracted to investigate the Russian intelligence hack of its computer system. And we know Russian intelligence carried out the hack because Mueller indicted 12 Russian operatives for it while laying out the exact details of how they did it.

Except to Trump, Russia didn’t do it—someone in Ukraine did. And it was done through CrowdStrike, which the president has decided is actually a Ukrainian company (again, it’s based in San Francisco) and that it works directly for the DNC. To QAnon believers, these conspiracy theories are confirmation of what they’ve believed for the last three years: DNC employee Seth Rich hacked his organization’s own server, and the DNC panicked and made it look like the Russians did it—while hiring MS-13 gang members to execute Rich and make it look like a robbery.

All the time, CrowdStrike stole the DNC’s server and is now hiding it in Ukraine. And only Trump knows the truth.

The swamp just did what Q legally could not: force evidence into the public record showing how Obama's gang of thugs hid Hillary's Crowdstrike server in Ukraine to cover up her email espionage, and use the country as a satellite for their attempted coup on Trump. Thanks. #TREASON

Again, this doesn’t make a whole lot of sense and contradicts itself at points. There is no missing server, and most of the DNC’s servers are cloud-based, not physical items. Rich’s murder has no connection to the DNC, as he was an analyst in its voter data section, not a hacker with access to high-level email accounts. And if CrowdStrike is a Ukrainian company (it’s not), how did the D.C.-based Rich hack it? Did “the server” just magically move continents at some point?

That said, there’s a reason why conspiracy theorists are connecting all of these things together. The cybersecurity firm has made it into a number of Q drops, where it’s been directly connected to Rich’s still-unsolved murder, and also accused of being part of an “infiltration program based on payments to [the Clinton Foundation.]” Ironically, QAnon’s references to the Clinton Foundation are full of inferences to a “whistleblower” who will bring the entire rotten enterprise down—yet another debunked conspiracy theory.

Is Trump reflecting back the un-evidenced accusations made by QAnon? It’s hard to say. Indeed, it’s not exactly clear if Trump even knows what Q is. But the president’s conspiracy theories and QAnon’s conspiracy theories are mostly identical. And QAnon believers are taking Trump’s mention of CrowdStrike not just as confirmation that Q has been right this whole time, but a hat-tip to the Q movement itself.

Without 8chan around to host new Q drops, it’s left to followers of the movement to puzzle everything out. One thing they haven’t done, though, is fold 8chan’s demise into the impeachment and Ukraine conspiracy theory. Wouldn’t the deep state want to make sure patriots can’t get secret information from Q before it made a final move on Trump? Oddly enough, no.

Q believers take solace that the board’s owner, Jim Watkins, wore a Q pin when he went to Washington to give a deposition regarding the site’s use to house white supremacist manifestos. And they continue to hang on updates from people associated with 8chan claiming that the board is only days away from returning, with the board’s admin tweeting that “things are looking optimistic” for it to be back online.

Everything should make sense soon. In final stages of setting up new systems now. I'm not going to promise a date yet, but things are looking optimistic.

8chan’s status isn’t really relevant to QAnon anymore. Q believers have made it clear to both the Daily Dot and other sites that they will continue to “research,” make memes, and support Trump no matter what, even if Q never posts again. That could account for the ambivalence among Q believers. If the board comes back, great. If not, then as Q has put it many times “we have it all”—i.e., the 3,300 posts Q has already made.

Besides, when you think the president of the United States is using your conspiracy theories to conduct foreign policy, why would you need more?