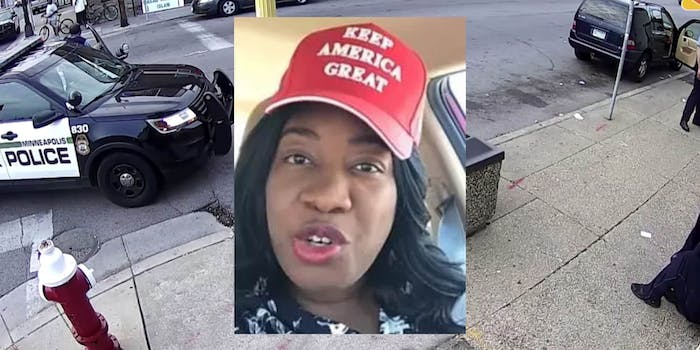 A Republican running for Congress is spreading conspiracy theories online, alleging the death of George Floyd was an elaborate hoax.

Winnie Heartstrong, who is currently seeking election in Missouri’s 1st Congressional District, asserted in a now-deleted tweet that Floyd had actually died in 2016.

Heartstrong further claimed that the footage that captured Floyd’s death had actually been altered by “deepfake technology.”

“The images of George Floyd that we saw on camera on May 25, 2020 were created using deepfake technology – digital composites of two or more real persons,” she said.

The candidate cites a report from a website titled “Investigate Deep Fake Floyd,” set up by Heartstrong herself, as evidence of the theory.

The site features images of Floyd as well as former NBA star Stephen Jackson, two individuals Heartstrong says were used in the creation of the deepfake.

The site even claims that Derek Chauvin, the ex-Minneapolis Police Officer who knelt on Floyd’s neck, is actually Cash Cab host and stand-up comedian Ben Bailey.

Heartstrong’s site calls on supporters to spread the conspiracy theory across social media under the #FalseFlagsMatter hashtag. A Change.org petition calling on President Donald Trump and Attorney General William Barr to investigate the incident is also included.

It remains unclear how much attention the petition received, as it was taken offline at some point. A Change.org spokesperson told the Daily Dot the platform removed the petition for violating its guidelines.

Although Heartstrong deleted her initial tweets regarding her theories, others still remain online.

Heartstrong promoted the petition in a June 15 tweet, in which she asserted that the “use of deepfake technology has serious implications for American civic and political life.”

The Daily Dot reached out to Heartstrong’s campaign to inquire about the candidate’s beliefs but did not receive a response by publication time.

Heartstrong celebrated the fact that her conspiracy was allegedly going “viral” among QAnon supporters in Spain after a video, in which she espoused her theories, was shared on Twitter.

“George Floyd is alive. Prove me wrong,” she says in the video, seemingly contradicting later false claims that Floyd died in 2016. The candidate goes on to question why “we haven’t heard anything about the mum,” even though Floyd’s mother passed away in 2018.

Henry Ajder, Head of Threat Intelligence at deepfake-monitoring service Deeptrace Labs, says the conspiracy is “one of the most divisive attempts to weaponize the idea of deepfakes” that he’s seen.

“It reinforces the concerns we’ve repeatedly raised that once awareness of deepfakes has spread sufficiently, the idea will be seized on by fringe groups and malicious actors not just to dismiss fake things as real, but also to dismiss real things as fake,” Ajder told the Daily Dot. “These cases illustrate how for a worrying number of people, deepfakes provide the missing thread of explainability that suddenly make conspiracy theories appear much more justifiable.”

Heartstrong, an avid supporter of Trump, has not backed away from the conspiracy theory despite pushback online.

This story has been updated to include a comment by a Change.org spokesperson.