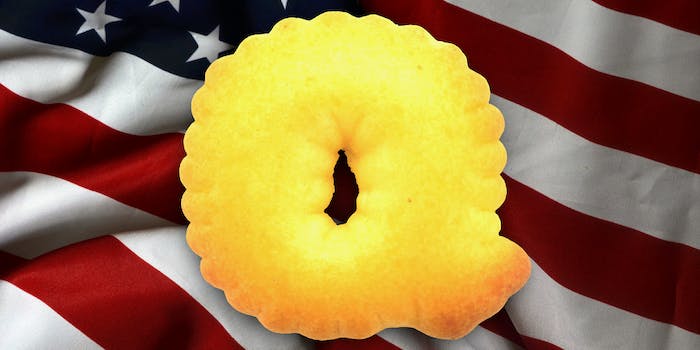 Should you care that Trump’s pastry chef believes in QAnon?

Here's what you should consider.

On Friday evening, the Daily Beast released a report that revealed a baker at President Donald Trump’s Mar-a-Lago resort believed in the QAnon conspiracy, the online movement that thinks Trump is secretly working to take down a cabal of pedophiles and Democrats within the federal government.

According to the report, the chef bakes Q-themed cakes while working at Trump’s Florida resort.

On Christmas, for example, [she] posted an Instagram picture of a gingerbread house in what appears to be a Mar-a-Lago ballroom. The side of the gingerbread house is emblazoned with a “Q” made of blue frosting and dusted with glitter.

“Merry Christmas from the Jewel of Palm Beach,” [she] wrote, adding a “#QAnon” hashtag and the acronym “WWG1WGA,” a reference to the QAnon slogan “Where we go one, we go all.”

The chef has baked cakes for Trump’s son, Donald Trump Jr. as well. In a bio, she wrote that she stepped down from a different job to serve the first family, implying she’s only been at Mar-a-Lago since Trump was elected. Whether this bit of information matters has become a surprising point of contention.

A lot of Trump supporters and conservative media types were adamantly against the baker being outed as a QAnon fan, calling it an overreach by the mainstream media.

“They’re doxing a pastry chef, because she works at a building owned by Trump. They’re going after a pastry chef,” Ezra Levant wrote on Twitter.

There is a factual error with the right’s narrative that the Daily Beast was “doxing” or publicly unmasking a private citizen, however: Her fringe and dangerous political views were publicly available to anyone who perused her social media profiles, according to the Daily Beast’s Will Sommer.

This woman is a pastry chef. She has zero power and zero impact on public policy. But because she’s eccentric and believes some wild conspiracy theories, Will Sommer decided to ruin her life and throw her to the mob. And they wonder why we hate them. https://t.co/wvcLcqXesA

Learn to code instead of harassing pastry chefs https://t.co/NbTG5sR3PL

Do you think Trump personally scoured #QAnon threads in search of a pastry chef, or are you Stretch Armstrong, desperately reaching into the cosmos for something sinister that simply isn’t there?

Perhaps she’s just a person w/ whom you disagree, that happens to be a pastry chef? https://t.co/lnz0kkDFKY

However, those who report on misinformation, conspiracy theories, and the far-right defended the decision. Jared Holt said that it’s important to note that someone in the president’s “orbit” is espousing not only conservative views, but celebrating a “cult with bloodlust.”

The chef isn’t a policy adviser, and it’s not known what her interactions with the family are, outside of occasionally baking for them. But QAnon believers have been known to commit acts of violence, and many online have been thirsty for the opportunity to unleash the fictional and violent “storm,” a sort of siege and crusade against Democrats.

She is a private citizen employed by a private company—she is not the White House pastry chef. However, it just so happens that the private company she works for is owned by the president and his sons.

If she’s unhappy that her public views are being flagged and called out, well, she may want to consider setting her Insta to private.