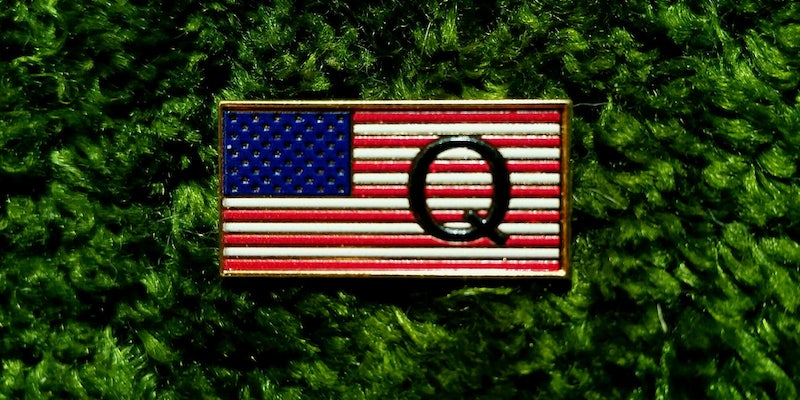 Why is QAnon so obsessed with taking down cults?

First conceptualized by Sigmund Freud and his daughter Anna, projection is the psychological phenomenon of accusing others of what you yourself have been accused of, or what you know you’ve done. And it explains the Q Cult obsession.

Since taking office, President Donald Trump has come to be something of a “projection president,” accusing others of what he himself has been accused of, from obstruction of justice to his frequent claims that “many people don’t know” things he apparently just learned or doesn’t understand.

One of the easiest "tells" on Trump is the simplest one–projection.

The things where he most vehemently criticizes others are almost always things in which he is often guilty himself.

This is the the same guy who has gone apeshit on Amazon, various media outlets, the NFL… https://t.co/x8njLrdijT

The conspiracy theory community, particularly believers in QAnon, is guilty of similar projection when it comes to the president they have wholeheartedly embraced. Q is their secret, brave messenger delivering coded blog posts about under-the-table and shadowy government proceedings.

QAnon is a movement that believes Trump is fighting secret government conspiracies against him and thrives on projection, and the inherent hypocrisy found within. Nowhere is this seen more than in the arrest of hedge fund tycoon and sex offender Jeffrey Epstein—-a man who was, at least for a while, a close friend of Trump.

Trump’s involvement in Epstein’s world is opaque and shrouded in mystery. Rumors abound on both sides. Trump himself claimed in 2002 that Epstein was a “great guy” who liked women “on the younger side.” There are also the stories that Trump and Epstein were the only guests at a party with upward of two-dozen girls, all flown to Mar-a-Lago especially for the gathering.

But more recently, Trump claimed he hadn’t spoken to Epstein in 15 years, and there are claims that Trump was so disgusted by Epstein’s conduct toward young women that he had him banned him from Mar-a-Lago, and has since been helpful to police investigating.

Among the worst accusations, and one that should be right in the wheelhouse of the child-trafficking obsessed QAnon, is that Trump and Epstein raped a 13-year-old girl at an Epstein party in 1993.

The case generated a headline-grabbing lawsuit but fell apart when the accuser withdrew the suit just before the 2016 election. Innuendo about the alleged attack has swirled around Trump ever since, with Trump detractors claiming that the girl withdrew only because of death threats, and Trump supporters claiming she was simply a liar or paid off by the deep state.

But Q Cult believers are loathe to mention the case at all, spending their time “digging and memeing” on all of the lurid accusations Q has thrown out regarding Epstein, such as secret tunnels and occult rituals at Epstein’s properties, while ignoring that Trump has been accused of directly participating in a heinous crime with Epstein.

Indeed, in the days since Epstein’s arrest, members of the QAnon movement have played up the depravity of Epstein, and by extension, the people around him, particularly Bill Clinton. But not Trump. Anyone other than Trump.

Of course, there are some major differences between the conduct Trump is accused of and what Epstein has been arrested for. Epstein has been arrested and has already served jail time for soliciting sex from a minor. Trump has never been under serious legal scrutiny for the sexual assaults he’s been accused of by over two-dozen women. And the rape that Trump and Epstein were accused of committing together has never been proven to have taken place—and media stories have pointed out serious holes in the accuser’s story.

The connections between Trump and Epstein continue to be mostly the subject of innuendo. But no matter what comes out, it’s likely that Q Cult believers will continue to absolve Trump’s behavior while connecting Epstein’s to lurid conspiracies. Even in cases when it’s similar behavior.

Beyond QAnon’s projection as far as Trump, the movement is remarkably unaware of how it ignores its own cultish aspects while attacking such aspects in other movements.

Chief among these is the NXIVM sex cult, and the arrest of high-profile member Allison Mack in early 2018. Since news first broke that Mack and cult guru Keith Rainere had been arrested, they have been constant topics of QAnon discussion.

Mack was alleged by the Q poster to be “singing like a bird,” and naming a wide range of names linked to sex trafficking, from Barack Obama to the Fiji Water company. A few Q Cult believers have even linked Epstein to NXIVM, though the two don’t seem to share any similarities beyond basic perversion.

QAnon watchers closely followed Raniere’s trial and conviction in late June. Q teased more arrests, and followers put together endless strings of tweet threads and videos about who would be the next to go down. But the cult hasn’t produced any other arrests of note, meaning the QAnon movement found itself in an odd predicament: It was right about an actual sex crime being committed, but no great awakening took place.

And so they moved on to another, much more high-profile fringe movement: the Church of Scientology.

After all, “NXIVM was in large part a rip-off of Scientology ideas,” author and Scientology critic Tony Ortega told the Daily Dot.

Both NXIVM and Scientology have presented themselves as devoted to understanding and improving one’s own self. Both inveigle their participants with jargon and terminology meant to baffle outsiders and give insiders a kind of secret knowledge. Both share expansive mythology and an obsessive devotion to a central figure. And both have a small but high-profile celebrity following.

If that also sounds a little like QAnon itself, it’s because QAnon is a lot like that. It’s not a sex cult like NXIVM, or a fully tax-exempt religion, like Scientology. And it has nowhere near the power or influence that people like Jeffrey Epstein and Trump wield. But there are a number of similarities. QAnon revels in self-help concepts, like making memes to “red pill” people who haven’t been awakened to the conspiracy, and claiming “patriots have no skin color” while spewing out racist and anti-Semitic nonsense on a regular basis.

It doesn’t charge for membership, but QAnon has a vast merchandising industry behind it, encompassing everything from T-shirts to wall art and books. Where does this uncounted amount of money go? Mostly to anonymous gurus who spin Q’s drops to fit their own conclusion.

And just as Scientology baffles critics with talk of thetans and auditing, QAnon speaks of “bread” and “sauce” and freely misuses military terminology in a way that only believers will understand. Finally, it does have some disturbing cult-like and religious aspects, inspiring followers to abandon their own family members or loved ones if they don’t believe sufficiently while dissecting Q drops the way religious scholars study the word of the Bible, all while elevating Trump to a messianic state.

It’s in that last aspect, the elevation of Trump by conspiracy theorists to a religious figure, that it all ties back to Epstein. Q Cult and Pizzagate believers pat themselves on the back for helping bring down Epstein and give credit to Trump for landing the critical blow. Yet they have completely written off every accusation against Trump as politically or financially motivated lies, even when they are literally the same accusations as the ones against Epstein.

All of this shows a movement with no awareness of itself, no sense of its own hypocrisy, and nothing but forgiveness for the figures at its core. This is, essentially, the makeup of a cult.