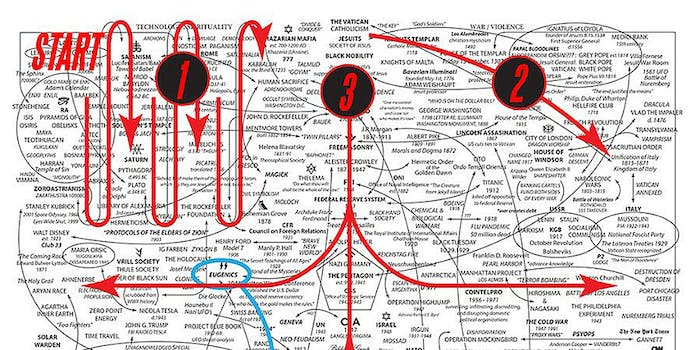 Here's everything you need to know to understand it.

Like many conspiracy theories and prosperity scams before it, Q Anon is full of jargon and terms that only believers understand and apply correctly.

This has a two-fold effect: it makes believers feel like they have special knowledge that “normies” outside the conspiracy don’t have, and it discourages new people from sticking their nose in, which keeps the purity of true believers intact.

But Q Anon is starting to migrate from 8chan, Twitter, and Reddit to legitimate media outlets. There have been a slew of print and online pieces about Q and his/her believers recently, exposing it to people who ordinarily have no interest in conspiracy theories. Those who dive in to find more wind up in a thicket of codes, nicknames, military terminology, references to earlier posts, and obscure terms.

Here is a guide to some of the most widely used terms thrown out by both Q and Q followers on social media and the web:

Q/Q Anon: This is the self-given name to the poster claiming to put classified intelligence online for a growing group of followers. Q began his/her run under the name “Q Clearance Patriot” and since then has mostly identified just as “Q.” Theories abound as to who Q is, with guesses ranging from a member of President Donald Trump’s administration to Trump himself to various internet figures.

The vast majority of the drops take the form of cryptic statements, rhetorical questions, or responses to other 8Chan posts. Occasionally Q posts a picture, which they have claimed are all original or taken from hacked phones.

The Storm: Q Anon originally began making posts related to a cryptic comment President Trump made in October about “the calm before the storm” when referring to a group of military officers. Trump’s remark was October 7, and the first Q post, referencing a 4chan comment about Hillary Clinton being arrested, dropped on October 28th. It’s still not clear what “the storm” refers to, though there are a number of guesses, including mass arrest of Democrats, sex offenders, and enemies of Trump.

The Great Awakening: Initially, the theories created by Q followers pointed to Special Counsel Robert Mueller working in tandem with Trump to take down the cabal Trump was fighting. The destruction of the Democratic cabal became known as the “Great Awakening.”

Q used the term often in early posts, but much less since then, and the concept of Trump unleashing mass arrests has mostly fallen by the wayside in favor of general support of President Trump and a growing cult of personality around Q.

Q Clearance: Q’s justification for how he/she possesses the secrets he/she claims to drop. In reality, “Q access authorization” is a term used only by the Department of Energy, and is analogous to Top Secret clearance in the Department of Defense.

Proofs: Used in the plural, this refers to evidence that Q is real and/or that Q drops have revealed information on events that have come to pass.

Comms: Common abbreviation for “communications.” Q will often say “no outside comms” to claim that anyone posting as Q outside 8chan is fake.

Redpill: The act of exposing “normies” (ie, non-believers) to Q drops. Originated in the movie “The Matrix” and used by a variety of fringe groups seeking to turn non-believers into followers, specifically in the men’s rights movement.

Pedo-gate: Q has claimed that there are massive numbers of pedophiles in politics, entertainment, and business; all part of a Satantic cult that eats children and openly flaunts its misdeeds through symbols and coded language. This is an offshoot of the debunked Pizzagate conspiracy theory, and uses some of its same concepts. Many of the early references to Q Anon were in conjunction with online sleuths trying to tie public figures to imaginary pedophilia rings.

News unlocks map: A Q catchphrase that refers to the web of corruption and pedophilia that has overtaken the U.S. government. Q followers have taken to turning this web into an actual map, which is extremely difficult to understand if you’re not soaked in the conspiracy.

Future proves past: Another Q catchphrase, this one denoting that future events will prove past Q drops and previously theorized conspiracies.

Sealed indictments: QAnon believers used to tout a massive number of sealed indictments in the federal district court system as proof that the mass arrests promised in the Great Awakening were about to happen. The large number appears to stem from a misunderstanding in how sealed court documents work, and the entire concept isn’t used much on Q-related social media anymore.

WWG1WGA: An abbreviation for “where we go one we go all,” and used by both Q and conspiracy believers. Q first used it on April 2 and attributed the quote to John F. Kennedy, but it appears to be a line of dialogue from the 1996 movie “White Squall.”

Tripcode: The unique sequence of letters that Q’s 8chan account uses for posting. Q has had his/her tripcode compromised a few times.

Fireworks/Pain/Boom: Terms used by Q to denote bad things about to happen, or that have happened, to members of the cabal.

“Fireworks” usually means a major media story currently breaking (which Q attempts to retroactively predict), while “”Pain” is about something had happening to the cabal, and “Booms” are usually major revelations—real or imaginary.

Anons: the anonymous followers of Q who dissect drops for clues to their meaning.

Autists: Another term for the followers who obsess over the meaning and clues of Q drops. A takeoff on the term “weaponized autism,” used in reference to self-proclaimed online detectives who try to solve major crimes before police can.

187: Popular culture term for murder, stemming from California Penal Code section 187. Q will often make reference to figures being “187’d” by the deep state, including former DNC staffer Seth Rich, who has figured in a number of conspiracy theories due to fictional links between him and the hacking of the DNC.

5:5: A radio communications expression that means “loud and clear.” One of many military or technical terms Q will often throw out, trying to insinuate that some kind of special operations mission is being carried out under President Trump’s orders.

LARP: Abbreviation for “Live Action Roleplaying Game.” A number of writers have speculated that Q Anon is simply an internet roleplaying game, which Q often mocks by posting links to articles about the conspiracy theory, and rhetorically asking “all for a LARP?”

Clowns: A reference to the CIA, who are also referred to as “C_A” for some reason.

Mockingbird: Refers to Operation Mockingbird, an alleged (though never proven) CIA operation to pay off and harass media figures to influence their coverage of American policy. Q used to reference Mockingbird quite often, but has only mentioned it once in 2018.

These aren’t the only terms that Q and his/her followers commonly use, but they’re the ones people need to know if they want to have some kind understanding of why the Q movement is gaining strength.

It’s a secret club—but the secrets aren’t all that hard to uncover.