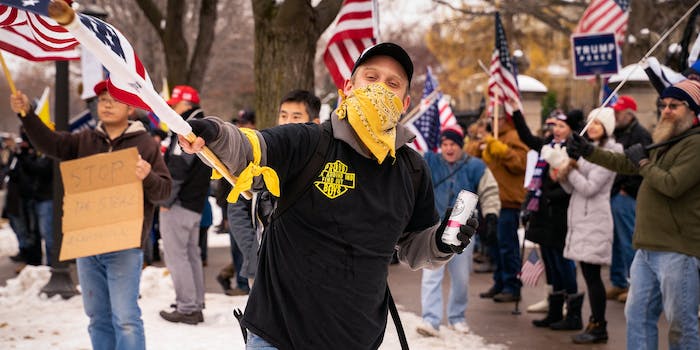 On Parler, Proud Boys leaders are calling for war.

The Capitol and D.C. Metro Police were clearly overwhelmed by Wednesday’s violent, deadly riots perpetuated by President Donald Trump’s supporters. They shouldn’t have been; it was all planned on social media.

In the weeks leading up to the mob attack on Congress, the extremist right openly discussed their intentions. The notoriously violent Proud Boys were chief among them. Now, they’re using the same forums to plot more.

Thursday, on Parler, the far-right haven that’s become their platform of choice, Proud Boy leader Enrique Tarrio wrote, “NEVER STOP FIGHTING.” Other leaders of the group have made similar statements celebrating Wednesday’s violence and promising that they’re not done.

“It’s not over with yet,” replied one of Tarrio’s followers. “We will fight to the death,” another said.

As the Daily Dot reported last month, on a YouTube show, Tarrio and others openly discussed sneaking into President-elect Joe Biden’s inauguration to “take over.”

“You show up there in Biden gear and you turn his inauguration into a fucking circus, a sign of resistance, a sign of revolution….” Tarrio said on the show. “You fucking kick off this presidency with fucking fireworks.”

In the days leading up to Wednesday’s riot, Proud Boys leaders strategized about what they were going to wear and chant and made numerous menacing statements about their plans.

“Watch out, [January] 6th,” Proud Boy Joe Biggs warned in a video on Parler. “You ain’t gonna know who the fuck’s standing beside you.”

His and other Proud Boys’ posts about the event provoked calls for people to bring firearms and murder elected officials, as well as police.

“Bring your modern day pitchforks and torches with plenty of hay to sling with the pitchforks,” someone commented on one of Tarrio’s Tuesday posts, discussing types of ammunition. “M855 and SS109 variants are advisable and the cops can’t graze on those strains of hay.. they are allergic to injecting it.”

When Tarrio mocked the media for reporting on the Proud Boys’ planned attire for the riot, one of his followers commented, “They are enemy, target them as well!”

Earlier in the week, Tarrio posted a screenshot of someone warning Washington, D.C. residents to stay home on Wednesday due to the Proud Boys’ plans to “break into federal buildings, cause violence against law enforcement, burn down buildings, and even try to shoot up federal employees and lawmakers.” He joked that his master plan had been foiled.

He made similar jokes about other warnings for D.C. residents to stay home, as did another Proud Boy leader, Jeremy Bertino, who calls himself Noble Beard.

In a video posted last week, Bertino warned antifascists, “You all are going to lose your fucking minds … See you in D.C.”

Five would die, including one police officer, as a result of Wednesday’s insurrection attempt that saw Congress overrun by an angry mob. The Proud Boys were in the thick of it, while their leader egged them on from afar.

Tarrio was arrested in the capital on Monday. Officers allege he was carrying illegal high-capacity magazines at the time, for which he faces felony charges. Tarrio claims he sells the clips as a side business. On Tuesday, a judge banned him from the district. He appears to have obeyed.

During the chaos, Tarrio posted numerous words of encouragement for the lawlessness on Parler. “1776,” he captioned a photo of a man inside Congressional chambers, referencing the far right’s collective delusion that they’re launching a revolution.

Bertino’s posts were much of the same. “Get the ropes. Let’s finish this!!” he wrote at one point after the Capitol was breached. “Find the traitors and get the rope. THIS IS OUR HOUSE!!” Bertino later wrote.

“I don’t want what happened today to continue to happen. But it is up to our elected officials to listen…” Tarrio wrote in the early morning hours on Thursday, adding ominously. “Because things can get ugly.”

“In order to secure freedom violence is necessary,” Bertino posted that day. “Independence is never gained by politely asking for it.”

They’re also falsely construing the death of the woman shot by police as she attempted to infiltrate the Capitol as murder in what appears to be an effort to whip their followers into a frenzy. It’s working.

“Martyr of the revolution!” said one of Bertino’s followers of the woman. “Vice President Mike] Pence might as well pulled the trigger himself!” another commented. Bertino and others believe that a member of Pence’s security detail shot the woman. It’s not clear why.

While it isn’t yet known what the Proud Boys are planning—for the inauguration or otherwise—where they go, violence follows.

“They had to know we weren’t fucking around anymore,” Bertino wrote Friday morning. “You can’t just ask for your freedom, you have to demand it.”

“And I tell you…Stand back and Standby,” Tarrio posted on Thursday.