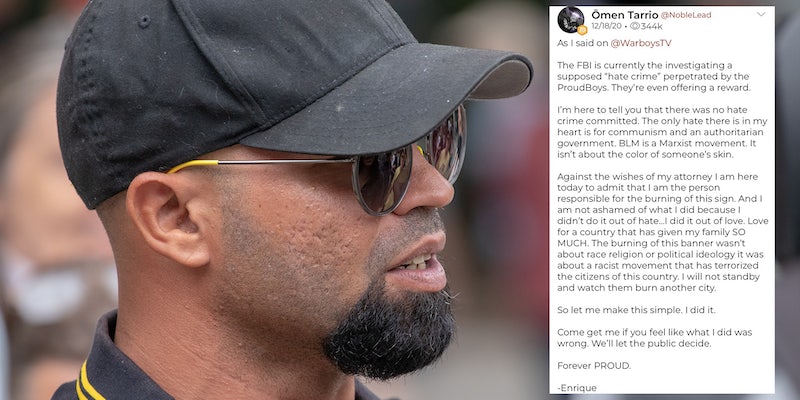 Arrested Proud Boys leader confessed to his crime on Parler

Not the most solid strategy.

Yesterday, Enrique Tarrio, who heads up the Proud Boys, was arrested in Washington, D.C. for his actions in a protest last month.

D.C. Police arrested Tarrio for burning a Black Lives Manner banner at a historically Black church in the city on Dec. 12.

Tarrio was charged with misdemeanor destruction of property. When he was arrested, police also charged him with felony weapons possession for high-capacity magazines he had on him, according to the Washington Post.

Tarrio was most likely in D.C. for the upcoming election protest on Jan. 6. He is expected to appear in court this week, but he won’t have much of a defense. On Parler last month, Tarrio admitted he’d taken the banner, boasting that police should come and get him.

He even said he hated the group he committed the crime against, which you would think would seal the deal.

“The FBI is currently investigating a supposed ‘hate crime’ perpetrated by the ProudBoys. They’re even offering a reward,” he wrote. “I’m here to tell you that there was no hate crime committed. The only hate there is in my heart is for communism and an authoritarian government. BLM is a Marxist movement. It isn’t about the color of someone’s skin.”

“Against the wishes of my attorney I am here today to admit that I am the person responsible for the burning of this sign. And I am not ashamed of what I did because I didn’t do it out of hate…I did it out of love. Love for a country that has given my family SO MUCH. The burning of this banner wasn’t about race religion or political ideology it was about a racist movement that has terrorized the citizens of this country. I will not standby and watch them burn another city. So let me make this simple. I did it.”

It’s unclear if love will work as a defense in a hate crime case, especially after admitting you hate the group whose property you destroyed.