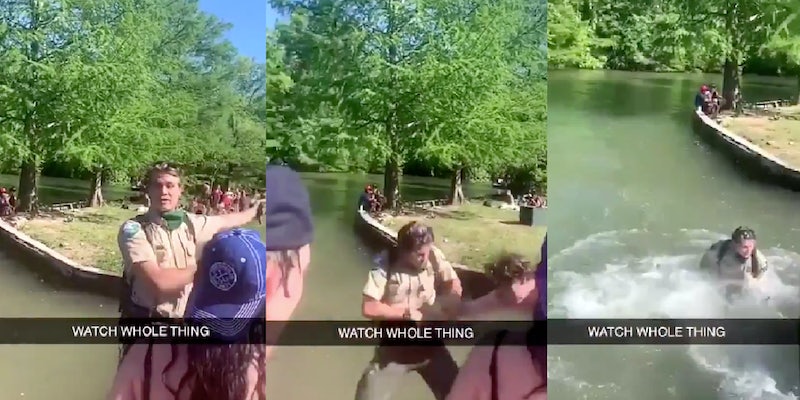 The person who pushed the ranger has since been arrested.

A man has been arrested after pushing a Texas park ranger into a body of water in Austin.

In a Snapchat video of the incident, which occurred on Thursday at Lake Austin, the ranger can be seen speaking to a group of people, urging them to maintain 6 feet of distance from each other. One man in the group then pushes the ranger into the water and, in the process, falls in with him.

According to KXAN, which obtained the arrest affidavit for Hicks, police responded to an incident at Commons Ford Metropolitan Park, where the ranger told them he was trying to break up a group unlawfully smoking and drinking. Hicks was arrested the same day and charged with attempted assault on a public servant, his bail set at $7,500, according to the Austin American-Statesman.

“Brandon’s intentional and reckless action could have caused the Ranger to strike his head on the dock as he was falling, and render himself unconscious in at least 3 feet of water where he could have drowned to death,” the affidavit reads, per KXAN.

According to KXAN, the person who recorded the video said “the park ranger was actually being really sweet and understanding before,” and they were glad Hicks is facing consequences for pushing him.

The park was temporarily closed for overcrowding shortly after the incident occurred, according to the Statesman.