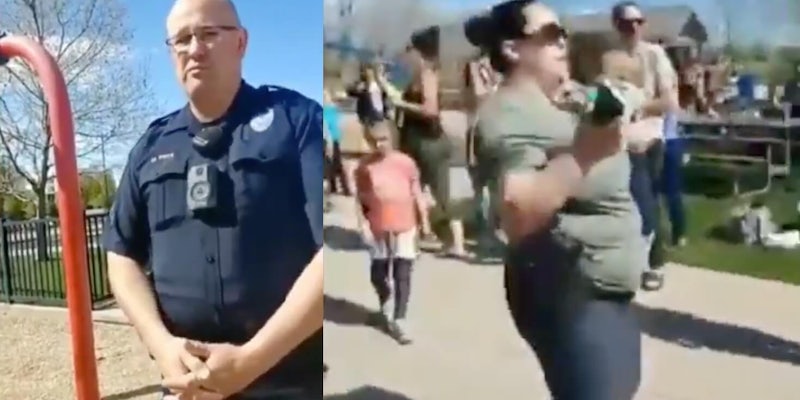 'Officer, you don’t want to do that.'

A video has gone viral of a white woman getting arrested for refusing to leave a closed park, sparking a conversation on white privilege.

Journalist Yashar Ali shared a clip of the video, said to be more than 40-minutes long, to Twitter on Thursday. The video, which was live-streamed on Facebook, according to KTVB7, was not available on Thursday afternoon.

“My god, the privilege is astounding but unsurprising,” Ali wrote.

The video shows two women arguing with a police officer about being on the playground, despite the city’s playgrounds being closed as a measure to contain the spread of coronavirus.

The incident took place in Meridian, Idaho, on Tuesday, and, according to local news, appears to have been an astroturf. Astroturfing, which may explain many anti-quarantine protests being seen across the country right now, is when people coordinate a protest making it appear as though it is organized through grassroots efforts, whereas it is actually organized through an entity with an agenda.

The woman, who was arrested and eventually released on bail, has been identified by KTVB7 as Sara Brady.

In the two-minute-long video, an officer is seen talking with Brady and another woman, who is recording the interaction.

“The city closed it,” the officer responds.

“Under what grounds?” she says, going on to argue that they pay taxes and, therefore, should be allowed to be there.

“I’m just a law enforcer officer and I’ve been asked to come here and make sure,” he says before his sentence trails off.

“Right. You’re the line of enforcement on an order that quite frankly is unconstitutional,” Brady says.

“But you’re enforcing it right now,” the woman behind the camera says.

The video then cuts to a different scene, where another officer is seen with a man in plainclothes saying to the women, “We’re just trying to protect you.”

“Right, protect us from getting vitamin-D and letting our kids play in the sunshine,” one of the women says.

Brady eventually outright asks the officer to arrest her. He puts handcuffs on her, and the woman behind the camera threatens, “Officer, you don’t want to do that!”

The woman behind the camera then follows the officer and Brady, and says, “He is arresting her for being on a public playground.”

Her video shows a quick glimpse of a mini procession following them, which is likely what revealed that this was an astroturf.

After Ali posted the video on Twitter, many expressed that they felt the women exhibited white privilege and that the officers even treated them differently than how they would have treated Black people.

“The white privilege here is astounding. The Park is Closed. Closed. That means to you too, lady,” Twitter user @pliego_laura wrote.

“It’s just like that time when a black child was playing at the park with a toy gun and was shot dead, ONLY DIFFERENT!!!!” another said.

Many expressed suspicion over Brady’s intentions.

“She knows damn well why the parks and playgrounds are closed. She went there for civil disobedience and to cause trouble. She is desperate for attention and wasting this officer’s time,” one wrote.

Brady is also a known anti-vaccine activist, BuzzFeed reported, and went viral among right-wing media immediately after her arrest.
Later on the day of the arrest, anti-government activist Ammon Bundy led a protest outside the home of the officer who placed Brady in handcuffs, HuffPost reported.