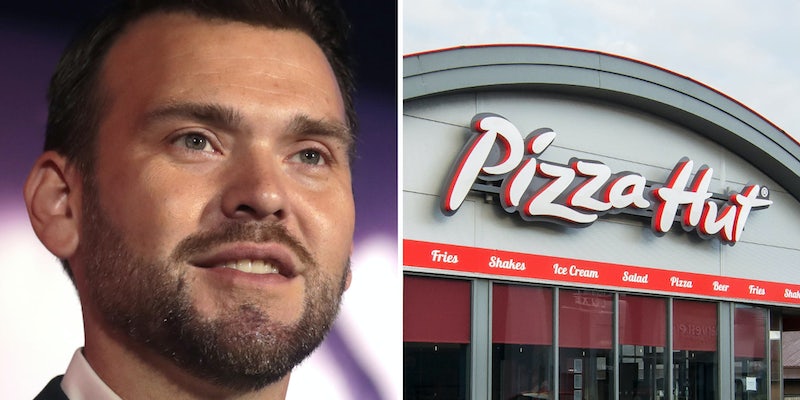 ‘Everything great from the 80s and 90s is gone’: Why the far-right is suddenly obsessed with Pizza Hut

To Jack Posobiec, a closed Australian Pizza Hut is everything.

Pizza Hut is having a very weird moment. A series of tweets by Jack Posobiec over the weekend inspired a wave of far-right nostalgia for the Pizza Huts of days gone by.

On Sunday, Posobiec tweeted about taking his kids to a Pizza Hut in the Washington, D.C. area. “…It was a wasteland,” he wrote, “Guess they don’t do dine-in anymore. Unmade boxes over all the tables, dirty, delivery drivers hanging out.”

The infamous purveyor of the Pizzagate conspiracy theory about a pedophile ring being run out of the basement of the Comet Ping Pong pizza parlor then fired off a volley of tweets about the Pizza Huts of halcyon days.

Rather than the first iterations of the 64-year-old company founded in Kansas, Posobiec is clearly longing for the Pizza Huts of the 1980s and 1990s. In those days, the world’s largest pizza chain featured salad bars, jukeboxes, Care Bears cups, and stained glass light fixtures.

To them, the chain’s changes over time aren’t so much about keeping up with shifting eating habits and styles, but are somehow emblematic of American decline.

In one tweet, Posobiec included side-by-side images of supposed Pizza Huts in China and America. The Chinese location doesn’t resemble Pizza Huts of the last century, but it is clean and well maintained. The “American” location is shuttered, rundown, vandalized.

While there are plenty of closed Pizza Huts in the United States he could’ve chosen, Twitter users quickly pointed out that the one pictured in Posobiec’s tweet is actually in Australia, as reported by a blog in 2015.

Posobiec retweeted some of the mockery, including one person who opined that his Pizza Hut tweets were “right wing propaganda to get the uneducated braindead MAGAs all riled up.”

Pizza Hut hasn’t responded to the sudden wave of right-wing sentimentality for the brand.

There are some tweets supposedly by Pizza Hut responding to Posobiec floating around Twitter, but they appear to be photoshopped by parody accounts.

Some went deeper with their analysis of the far-right’s sudden fondness for Pizza Huts.

To them, the sudden burst of nostalgia isn’t as much about Pizza Hut specifically as it is a general longing for the way things used to be. This is a common sentiment among people who feel jilted by recent decades’ gradual shift from the unquestioned dominance of straight, white, Christian men in American society.

Posobiec himself seemed to grasp this. “Pizza Hut nationalism,” he tweeted.

As @wokal_distance put it, people like Posobiec view the 1980s and 1990s as “stable,” “wholesome, fun and [allowing] for a sort of innocence.”

“This no longer exists. All the current Nickelodeon shows, Disney movies, and mass produced media are infused with radical politics,” they continued. “There are no neutral, shared, spaces. There is no childhood innocence…”

“All of this is gone, and the childhood we had we cannot give to our children because the world we were raised to survive in no longer exists.”

While he may be unable to restore the last century’s power dynamic, Posobiec need not despair the loss of the Pizza Huts of his youth. Last year, a podcast identified more than a dozen “classic” Pizza Huts, including one within driving distance of Washington, D.C.

And the BookIt program he so sorely misses (where kids get a free personal pan pizza for reading a certain number of books) is still alive and well. Unfortunately for Posobiec, it’s only available for ages 4 to 12.