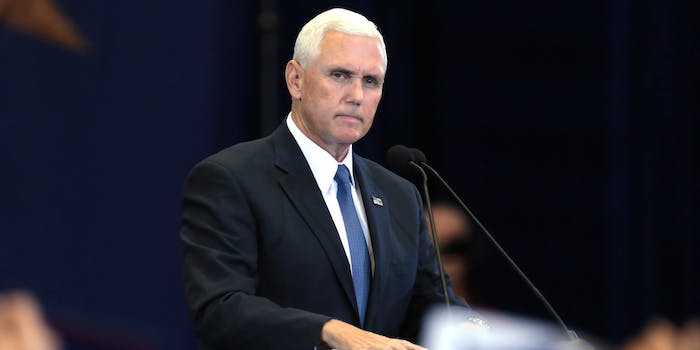 A video of Vice President Mike Pence delivering “empty boxes” of PPE is making the rounds on social media, but the deceptively edited clip doesn’t show the full story.

The viral video, widely shared by Twitter user Matt McDermott, comes from an episode of Jimmy Kimmel Live. As Kimmel narrates, it shows Pence, not wearing a mask, wheeling boxes of personal protective equipment (PPE) from the back of a van to the entrance of a healthcare facility.

That’s all real. According to a feed from C-SPAN, Pence was at the Woodbine Rehabilitation and Healthcare Center in Alexandria, Virginia, offloading supplies from the Federal Emergency Management Agency (FEMA).

Kimmel then goes on to frame the next scene as a “hot mic” moment. He claims Pence “didn’t realize he had a mic on” as he went back to the trunk for another round, only to be told those boxes were empty.

“Well, can I carry the empty ones? Just for the camera?” the Vice President asks.

“Absolutely,” he’s told, with the implication Pence went on to do just that.

Kimmel labels the stunt the “perfect metaphor” for Pence, who he calls a “big box of nothing.”

Thousands have shared the segment on Twitter, including prominent Democrats like James Carville and Rep. Bill Pascrell Jr. (D-N.J.).

As others on the platform have noted, though, that’s not exactly what actually happened.

The vice president did comment on the empty boxes as shown, but watching the unedited video, it is clearly a joke, and he goes on to shut the trunk doors after making it.

Jimmy Kimmel Live has since deleted its tweet featuring the clip.

McDermott kept his video up, adding another tweet to his thread for “additional context” and criticizing Pence for “joking about empty boxes of PPE during a publicity stunt” in the middle of the coronavirus crisis.

Twitter and Facebook have been attempting to crack down on manipulated media on their platforms, with both recently flagging an edited clip of Joe Biden.