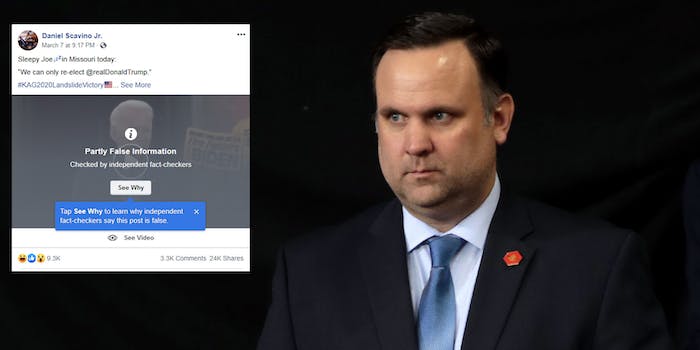 The clip cuts off the rest of what Biden said.

A video of former Vice President Joe Biden speaking at a 2020 rally over the weekend that was shared by President Donald Trump has been labeled “manipulated media” or “partly false” by both Facebook and Twitter.

The video was a shortened clip of Biden, who is trying to secure the Democratic party’s 2020 nomination, speaking at a rally in St. Louis, Missouri. In it, the former vice president stumbles on his words and says “we can only re-elect Donald Trump.”

However, the clip—which was shared by White House social media director Dan Scavino and retweeted by Trump—cuts off before Biden finishes his sentence.

His full remarks are:

“Excuse me. We can only re-elect Donald Trump if in fact we get engaged in this circular firing squad here. It’s gotta be a positive campaign, so join us.”

It was flagged by Twitter as manipulated media on Sunday, according to Reuters. However, the label was not showing up for all users—something the company said it was working to fix, according to the news outlet.

On Monday, Facebook followed Twitter by flagging the video. On Scavino’s Facebook page, the video now has a message on it that says it is “partly false information” and was checked by independent fact-checkers. It also has a link for people to see why it was tagged as partly false.

Early Monday morning, Scavino defended posting the clip, saying that it was “not manipulated.