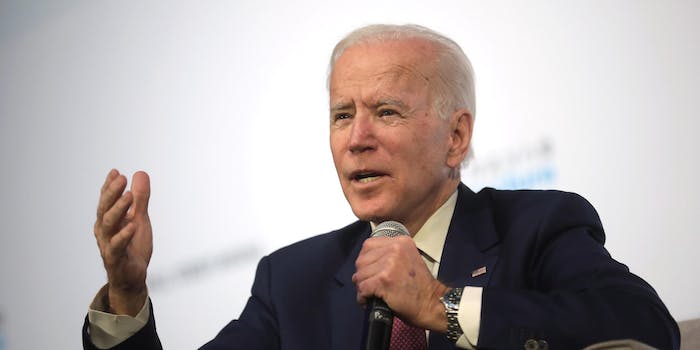 The Democratic National Committee (DNC) flagged a shortened video retweeted by President Donald Trump that made it seem like former Vice President Joe Biden only said “we can only re-elect Donald Trump” to Twitter before it was marked as “manipulated media,” according to a new report.

The Daily Beast reports that the DNC confirmed it flagged the video–which was shared by White House social media director Dan Scavino before being retweeted by Trump–as part of its “ongoing disinformation work,” which includes flagging activity to campaigns and setting them up “with tools to receive regular activity alerts themselves.”

The video was of Biden speaking at a rally in Missouri over the weekend to supporters of his 2020 presidential bid. Biden stumbles over some of his words, and the video makes it appear as if the former vice president only says “we can only re-elect Donald Trump.”

It cuts off before he can finish the rest of his sentence. His full remarks were: “Excuse me. We can only re-elect Donald Trump if in fact we get engaged in this circular firing squad here. It’s gotta be a positive campaign, so join us.”

Twitter marked the video as “manipulated media” and Facebook soon followed suit by slapping a warning on the video claiming it was deemed “partly false” by fact-checkers with a link for people to see why it earned that designation.

Scavino defended sharing the clip, saying it was “not manipulated.”

Some Democratic operatives thought Biden’s campaign was too slow to react to the video–which was viewed by millions of people before being tagged by the social media giants–the Daily Beast reports.