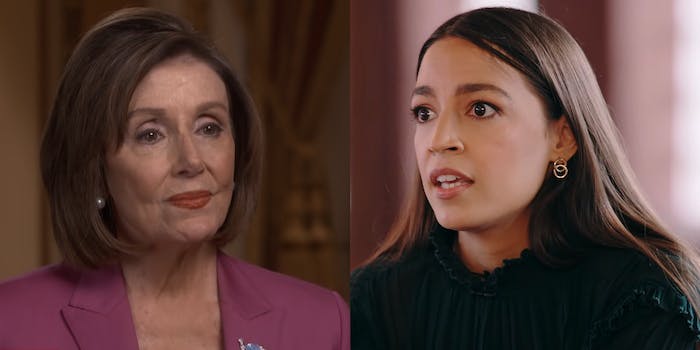 Ocasio-Cortez has enthusiastically supported Markey during his fight to fend off Kennedy, who has championed the Green New Deal with the New York progressive.

The Markey-Kennedy race has become one of the more closely watched elections for Democrats. Markey has drawn support from progressives and has suddenly found himself with a large contingent of online fans.

Polls show the Massachusetts Senate primary to be very close.

An aide to Pelosi told ABC News that Kennedy did not ask for the House Speaker’s endorsement and that she was “concerned by the attacks” from Markey, particularly where he spun off a famous quote from former President John F. Kennedy in a wildly popular ad he released last week.

“We asked what we could do for our country. We went out, we did it. With all due respect, it’s time to start asking what your country can do for you.”

Markey’s end quote was one of the more popular parts of the ad among people online.

“No one gets to complain about primary challenges again. So @dccc, when can we expect you to reverse your blacklist policy against primary orgs? Because between this & lack of care around @IlhanMN’s challenger, it seems like less a policy and more a cherry-picking activity,” Ocasio-Cortez tweeted, linking to a Boston Globe story about Pelosi’s endorsement of Kennedy.

“Ilhan’s multimillion challenge was bankrolled by DC lobbyists & dark money groups. He blatantly admitted to using shell corporations to get around the DCCC blacklist, which all but means his vendors work w/ the Democratic Party. Yet DCCC hasn’t enforced policy. I wonder why.”

The Massachusetts primary is on Sept. 1