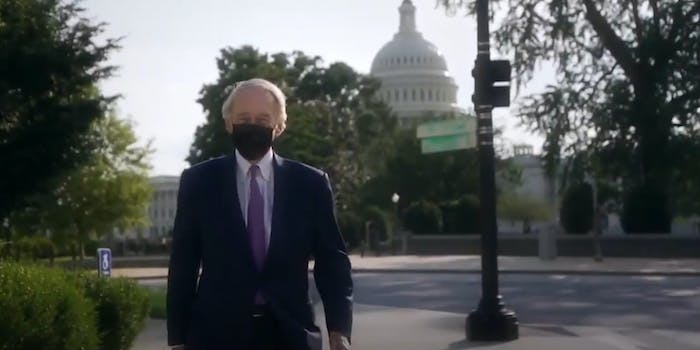 People are thirsting for Ed Markey after his latest campaign ad

People on Twitter are calling it the 'best ad of the year.'

Sen. Ed Markey (D-Mass.) released a new ad as he fends off a primary challenge from Rep. Joe Kennedy (D-Mass.) and people online are eating it up.

The video, which highlight’s the senator’s career and his push for the Green New Deal, was posted on Thursday afternoon and has already racked up thousands of retweets and likes, with some people calling the ad “incredible,” “the best ad of the year,” and a “damn good ad.”

The ad, which begins with “34 Ghosts IV,” a Nine Inch Nails song sampled in “Old Town Road,” includes a direct dig at his primary challenger when Markey plays off of one of former president John F. Kennedy’s most famous quotes.

“We asked what we could do for our country. We went out, we did it. With all due respect, it’s time to start asking what your country can do for you,” the senator says at the end of the video.

Markey’s popularity online has soared during the primary challenge, with the senator generating buzz on Twitter and TikTok.

That popularity was clearly on display shortly after it was posted.

The ad was noticed by a lot of people—and comes as a recent poll showed that Markey jumped ahead of Kennedy in what has been a tight race.

The Massachusetts Democratic primary is on Sept. 1.